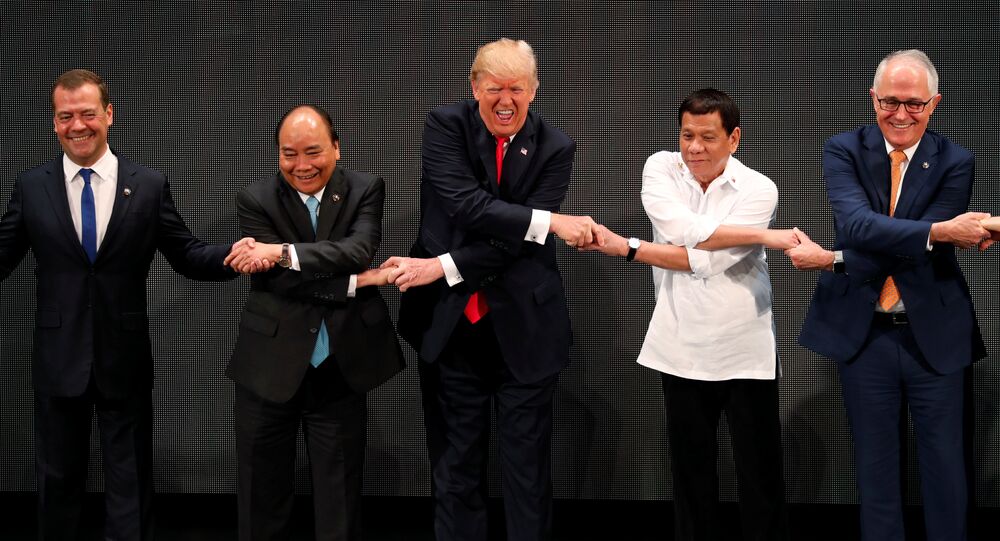 These days seem to be quite busy for Philippines President Rodrigo Duterte, who is currently hosting the 31st Summit of the Association for Southeast Asian Nations (ASEAN). He has kicked off the conference, which started with pageantry and a traditional cross-body handshake photo, and even performed for President Trump at the Summit's gala.

The Association of Southeast Asian Nations (ASEAN) is holding its 31st Summit in Manila, Philippines. The county's President Duterte, who is chairing the meeting, opened it on Monday.

The leaders of the ASEAN member states and their dialogue partners attended an opening ceremony and participated in a traditional group cross-body handshake photo, during which each leader shakes the opposite hands of those next to him or her.

© REUTERS / Jonathan Ernst
In a combination photo, U.S. President Donald Trump registers his surprise as he realizes other leaders, including Vietnam's Prime Minister Nguyen Xuan Phuc and President of the Philippines Rodrigo Duterte, are crossing their arms for the traditional "ASEAN handshake" as he participates in the opening ceremony of the ASEAN Summit in Manila, Philippines November 13, 2017

The event was preceded by gala where the host surprised the participants with the popular Filipino love song "Ikaw" (You).  President Duterte performed in a duet with local pop diva Pilita Corrales.

"Ladies and gentlemen, I sang, uninvited, a duet with Ms Pilita Corrales at the behest of the commander in chief of the United States," Duterte explained at the end of his performance.

One of the song's verses, translated from Filipino, begins: "You are the light in my world, half of this heart of mine". The Philippines leader however did not specify if it was meant particularly for Donald Trump.

​The video of Duterte singing was tweeted by Public Works Undersecretary Karen Jimeno.

On Monday, Rodrigo Duterte and President Trump had a bilateral meeting. Following the encounter, Harry Roque, Duterte's spokesman, told a news conference that the relationship between the two presidents was "warm, friendly and candid" and noted that they shared similar feelings about former US President Barack Obama.

Duterte sparred with former US leader in the past, vowing to say "son of a bitch I will swear at you" in case Barack Obama questioned him  about extrajudicial killings at the ASEAN Summit in Laos last year.

According to Harry Roque, the issue of human rights and alleged extrajudicial killings in the Philippines was not discussed during the meeting on Monday.

Earlier on Sunday, police in the Philippines used water cannons and batons against thousands who had marched toward the US embassy in Manila, protesting the arrival of the US president.

© REUTERS / Erik De Castro
Protesters are hosed by a water cannon as they clash with police during a rally against the visit of U.S. President Donald Trump, who is attending the Association of Southeast Asian Nations (ASEAN) Summit and related meetings in Manila, Philippines, November 13, 2017