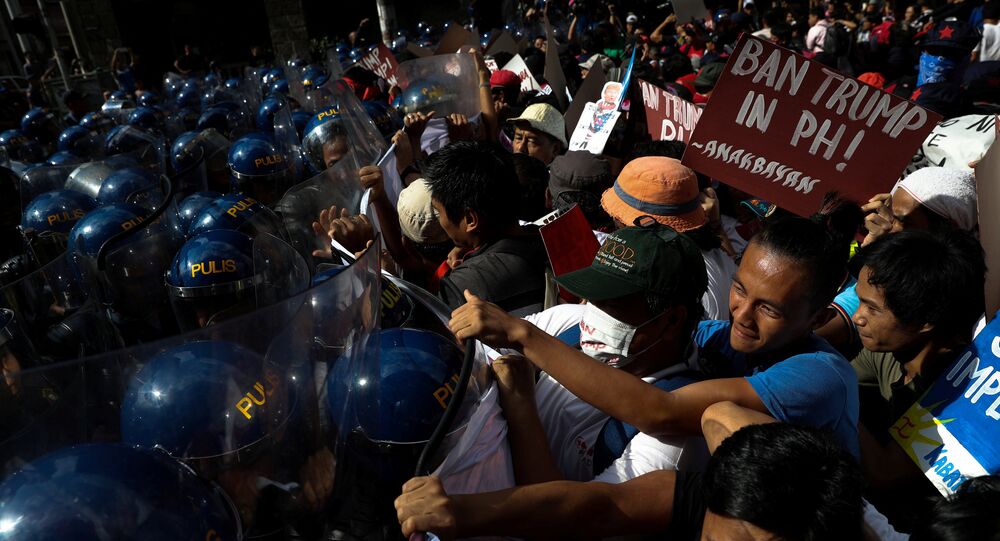 Thousands of people have marched toward the US embassy in the Philippine city of Manila on Sunday, protesting the arrival of US President Donald Trump for the 31st Association of Southeast Asian Nations (ASEAN) Summit and his policy.

MANILA (Sputnik) — The protests, attended by college students, middle-aged working-class men and farmers from the countryside among others, were initiated by local left-wing groups such as the New Patriotic Alliance, also known as the Bayan.

"Our call is to ban Trump in the Philippines, because for all we know the United States has been launching wars all over the world, in the third world countries that they’re trying to get into, such as Iran, Iraq and Syria. The US imperialism brings only wars and destruction in its neo-colonies such as ours," Kristine Cabardo, leader of the AKLAS, a youth alliance based on the Philippine island of Mindanao, who arrived in Manila to take part in the anti-Trump protests, told Sputnik.

© REUTERS / Erik De Castro
ASEAN, Hong Kong Sign Free Trade, Investment Agreements at Summit in Manila
The group of protesters gathered at around 2 p.m. local time (06:00 GMT) at the Kalaw Avenue, before marching toward the US Embassy located at the end of the street, near the Manila Bay. Despite the steaming heat and extreme humidity, the protesters were determined to show their anger against the prolonged US military presence in the island nation.

"We want to end US intervention in the Philippines. They’re here for economic interests. Their multinational companies are all over the Philippines. All of this came at the expense of our people. The United States has never left the Philippines, ever since they colonized us. US imperialism is the biggest horror in this nation," Cabardo said.

​Renato Reyes, the secretary general of the New Patriotic Alliance, explained why he had organized the protests against Trump.

"We condemn in the strongest terms the state fascism that has been imposed on Filipino protesters. The protests are justified. Trump is an enemy of the people," Reyes told Sputnik.

#BanTrump protesters pushes towards US Embassy in Ermita, Manila pic.twitter.com/fJso5J7cMg

​According to Reyes, about 2,000-3,000 people took part in the protests. When the group of demonstrators got as close as one block away from the US Embassy, local police tried to stop them by forming human shields and blocking their way, which led to clashes with protesters. More than 20 people were injured and one was activist detained as a result of the clashes, Reyes added. In order to prevent the crowd, who held massive yellow banners reading "Ban Trump" and colorful flags, the local police had to use water cannons to force the protesters away from the main road leading to the US embassy, Reyes said.

US President Donald Trump lands in Manila for ASEAN Summit amid protests against his visit https://t.co/Ryjc59HFWp pic.twitter.com/coIYwgrg8P

© AP Photo / Pat Roque
Protesters in Manila Take to the Streets Over Trump’s Visit for ASEAN (VIDEO)
After the protesters were cornered in a narrow alley two blocks away from the US embassy, they started to sing songs and chant slogans such as "No Trump, No War! Stop US war machine, ban Trump in the Philippines! US Troops out now!" A green Toyota SUV with huge loud speakers mounted on the top served as a buffer between the police and protesters, while organizers of the protest continued to lead the crowd with different anti-Trump chants.

At one point, protesters set a US flag, with skulls replacing the stars, on fire. After about two hours of shouting and singing, the organizers persuaded protesters to retreat peacefully and even returned several pieces of police gear including anti-riot shields and helmets to police officers on the scene, before withdrawing from the streets.

US-ASEAN will further all-out market liberalization in the country.#BanTrumpPH#ASEAN2017 pic.twitter.com/pFtwlnN1R5

​As the 31st ASEAN Summit’s key meetings of world leaders expected to kick off Monday morning, Reyes said his organization planned to march toward the main venue of the summit, the Philippine International Convention Center, to continue the demonstration against Trump by burning a life-sized paper figure of the US president.

© CC0 / Pixabay
Russia Backs Thai Proposal to Open ASEAN Cybersecurity Hub in Bangkok
Cabardo said that by targeting the ongoing ASEAN Summit, she wanted to express her grievance against the Philippine government.

To ensure the safety of world leaders and avoid potential disturbance during the ASEAN Summit, the Philippine National Police have deployed over 60,000 officers in the streets of Manila and Angeles City, where the summit is being held.