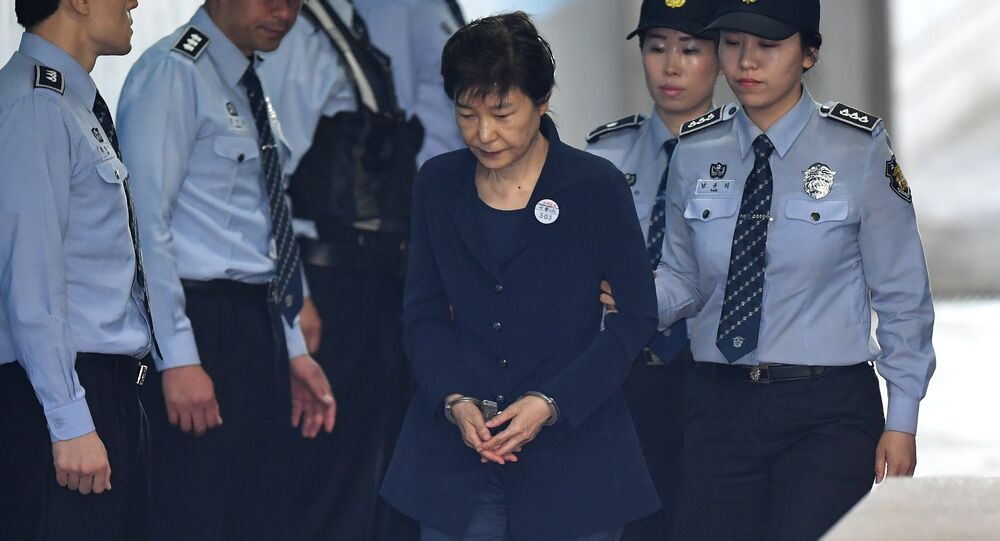 A former South Korean director of the National Intelligence Service has revealed that the agency had been transferring about 50 million per month to the office of the former president, who was impeached over a corruption probe.

MOSCOW (Sputnik) — South Korean prosecutors have questioned a former director of the National Intelligence Service (NIS), Lee Byong-ho, over secret funds the agency allegedly transferred to the former President Park Geun-hye, when they both were in office, the Yonhap news agency reported Friday.

The questioning comes hours after Lee Byong-ho, who headed the NIS from 2015 to 2017, appeared at the Seoul District Prosecutors' Office and answered questions related to the allegations that the agency had provided the South Korean president's residence with a total of about 4 billion won ($3.57 million) in "special activity funds" between 2013 and mid-2016.

"Now is the time when it is badly needed to strengthen the NIS. On the contrary, the NIS sustained heavy damage and is being rocked and weakened," Lee told reporters.

Nam Jae-joon, the first NIS director under President Park, was also been questioned for a total of 19 hours by prosecutors on Wednesday over the same allegations, and the third NIS chief, Lee Byung-kee, will be questioned on Monday.

During the questioning, Nam largely admitted NIS had been transferred about 50 million won to the president's office every month, and the prosecutors suspect that the monthly payment increased to about 100 million won during Lee Byung-kee's and Lee Byong-ho's tenures, the officials said.

NIS has recently faced severe criticism over its involvement in South Korea's politics. In August, it was revealed that the agency had conducted online smear campaign against former President Roh Moo-hyun (2003-2008) to manipulate public opinion in favor of Lee Myung-bak, nominated for the 2008 presidential election by South Korean conservatives.

The agency was also accused of interfering in the 2012 presidential election, when Park Geun-hye, nominated by the conservative Liberty Korea party, won over then-Democratic Party nominee Moon Jae-in.

Reforming the NIS was one of Moon's election promises. In June, new NIS Director Suh Hoon banned domestic intelligence operations from gathering information on ministries, media and other organizations and established a reform committee, which was tasked with regaining public trust by transforming the NIS into a credible agency.

Last week, South Korean prosecutors have also launched an investigation against the head of a public broadcaster KBS, Ko Dae-young, who allegedly was bribed by NIS officials to not publish news against them.