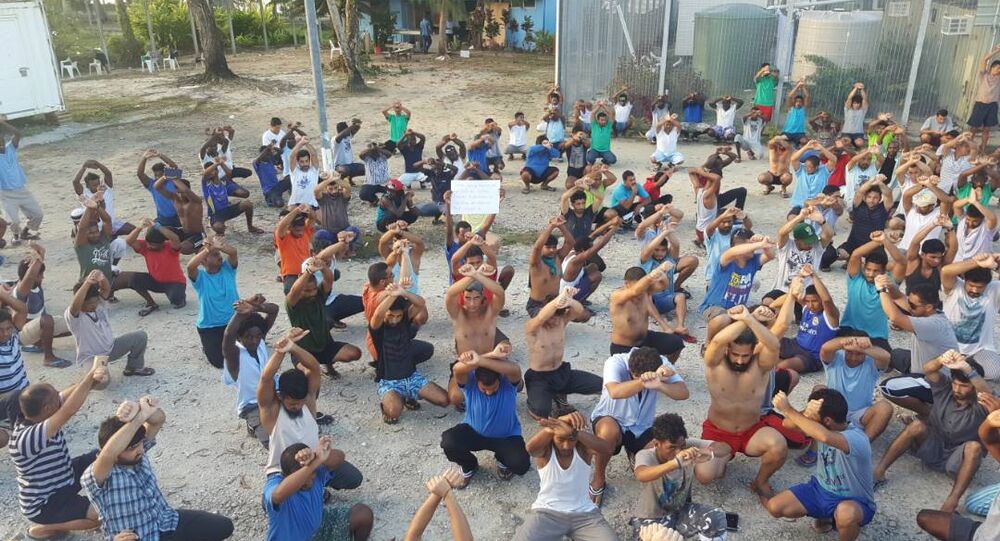 A day before the deadline for forcible removal, Papua New Guinean officials have begun dismantling makeshift shelters at Manus Island detention center. Footage from inside the camps depict "appalling conditions."

​Footage filmed by Australian NGO GetUp! depicts men sleeping outside on tables to escape interior heat, and a lack of basic sanitation such running water or washing facilities.

​Iranian refugee and journalist Behrouz Boochani, one of the camp's residents, has documented the destruction on Twitter, recording how shelters and makeshift water collection apparatuses have been systematically dismantled by security forces.

The United Nations High Commissioner for Refugees, Filippo Grandi, has described the situation there as a "humanitarian emergency."

Hundreds of hungry, half-naked, powerless men are asking people around the world to support them. Manus prison camp is so scary at this moment.

Still delusional. 1200 people drowned at sea under Labor and agreement you signed was not time limited. Is your plan Labor’s ‘real’ plan? https://t.co/yK9Nagy9IK

Australian immigration minister, Peter Dutton, has accused the refugees of destroying their own accommodation in order to make conditions look as bad as possible, since the Australian government cut off the food, water, medical assistance and electricity to the refugees at the center.

"This is like having a tenant in a house and asking them to move in six months into a new house. We cut off water, power to the old house and we're paying for you to go to the new house. We will give you meals, with all of the security and medical needs you could need and people say 'no, I will not leave the old house, I am going to stay here'. And trashed the place and then put images out of that," he said.

Peter Dutton is insulting and humiliating humanity by saying "we give them three meals a day." People who accept his comment should be ashamed. Freedom is our right.

​The remaining refugees refuse to leave and settle in new accommodation in Manus as they don't feel safe in the local community — and independent observers say the proposed new housing is inadequate and unfinished.

These men are sick, thirsty and hungry. The conditions are appalling and it’s obvious you wouldn’t choose to stay here if you thought you could be safer elsewhere. #evacuatenow