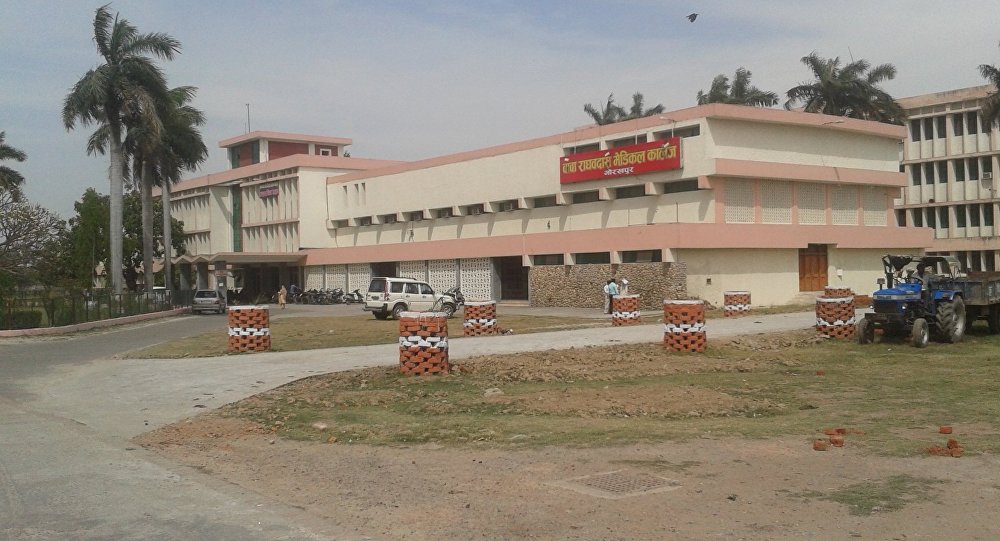 New Delhi (Sputnik) — More than 60 children, mostly infants, have died at a hospital in India's northern state of Uttar Pradesh in the last four days. In the last 48 hours, 30 children have died; six due to Japanese Encephalitis. Gorakhpur's BRD Hospital where the deaths occurred is the same hospital which reported the deaths of 60 infants in a week including 30 on one day alone in August of this year, triggering public outrage against the hospital authorities and state administration.

© AP Photo / Bikas Das
Girl's Starvation Death Sparks Controversy Over India’s Compulsory ID Numbers
Following the massive protests in August, Prime Minister Narendra Modi sent a special team to investigate the reason for the deaths. The revelation that came out of the investigation was that the 60 children that died over a period of seven days were all suffering similar conditions and that the hospital did not have sufficient oxygen supplies.

According to official figures provided by the hospital, 418 children died in August, 433 in September and over 400 in October.

"The first four days of this month witnessed 58 deaths — 32 of the children who died were less than a month old." Professor Dr. D.K. Srivastava, Head of the Department of Community Medicine, BRD Hospital told Sputnik.

Doctors deal with a high number of patients, nearly 4,500 daily, at the hospital, with people coming in from not only Gorakhpur but also from other districts of Uttar Pradesh and from the neighboring state of Bihar and even Nepal. Due to a lack of health facilities available in nearby towns, approximately nine million people have to rely on the Gorakhpur BRD hospital which further creates problems for the already overwhelmed doctors.

"There are multiple factors involved in the high level of child mortality. First, it is the most backward region; economically and socially, of the country where public health facilities are not available and economic condition do not allow them to consult private hospitals during the initial stage of any disease. By the time the infants arrive at the public hospital of Gorakhpur, their condition is already critical. It becomes difficult to save infants at this stage," Dr. Ravi Mohta of the pediatrics department of India's most reputed government-run hospital AIIMS told Sputnik.

Earlier this year, when announcing the Budget, the Narendra Modi-led government announced an increase in health spending to be at only 1.4% of gross domestic product; less than that of Afghanistan and Iraq.

"The country is facing a severe health crisis. There is an overall shortage of 40-50% of doctors while the number is more severe in rural areas like in Gorakhpur. In government hospitals, one doctor has to see at least 200 patients an hour. Just imagine the situation," Dr. Ravi Mohta added.

The Indian government has been running a vaccination drive against Japanese encephalitis but it has largely failed to curb the mortality rate in the region. "For any vaccination program to succeed, well-connected infrastructure and trained people are a must. But, the region lacks both. Even, the people are not educated and socially aware," Dr. Ravi Mohta concluded.