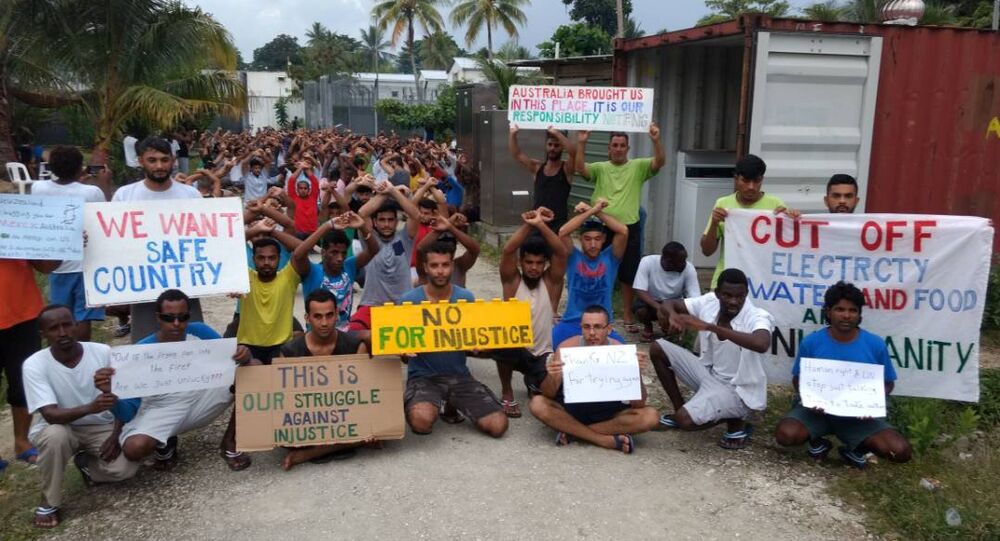 Australia has been paying to Papua New Guinea and Nauru to shelter asylum seekers, among which are also Rohingya Muslims from Myanmar, who try to reach the country's coast by boat. Although Australia recognizes that they are refugees many of whom cannot return to their homes, it refuses to accept them.

Spokesperson for the UN Rights Office has reminded that Australia took on the responsibility under the 1951 Refugee Convention "to protect people from harm" and guarantee access to food, water and health care. However, since 2013 six asylum seekers have already died at the Manus Island center.

What's difference between those 2 pictures?
Can you believe the left one is Australia's offshore camp?exactly same as Africa (the right one) pic.twitter.com/7823BrRlRI

Recently the inmates of the detention center, sometimes dubbed" Australia's Guantanamo", have barricaded themselves inside the center as they feared they could face "unchecked violence" from locals who had attacked them in the past, occasionally with machetes and rocks.

READ MORE: Refugees Barricade Themselves in Manus Island Detention Center Ahead of Closure

© Flickr / Greens MPs
Leaked Documents Reveal Australia's Plan to Force Refugees Out of Manus Center
The center was opened in 2001 to house refugees that attempt to reach the Australian shore unofficially by boat. Legal action was launched to fight its closure since people are housed in inhumane conditions below Australian standards, given inadequate medical treatment and exposed to systemic abuse and violence there. The compensation totalling AUD$70 million (US$53m) was offered to asylum seekers and refugees detained on Manus Island, however, the government called the settlement "prudent" — and denied any wrongdoing, ruling out rehoming inmates in Australia.

​A year ago Australia and the US reached a resettlement deal which stipulates that the most vulnerable migrants such as women and children will be relocated to the US. The US agreed to take up to 1,250 refugees from the centers in Papua New Guinea and Naur, however, an estimate of how long the application process will take was not given. In addition, the US stressed it was a one-off deal which would not be repeated.