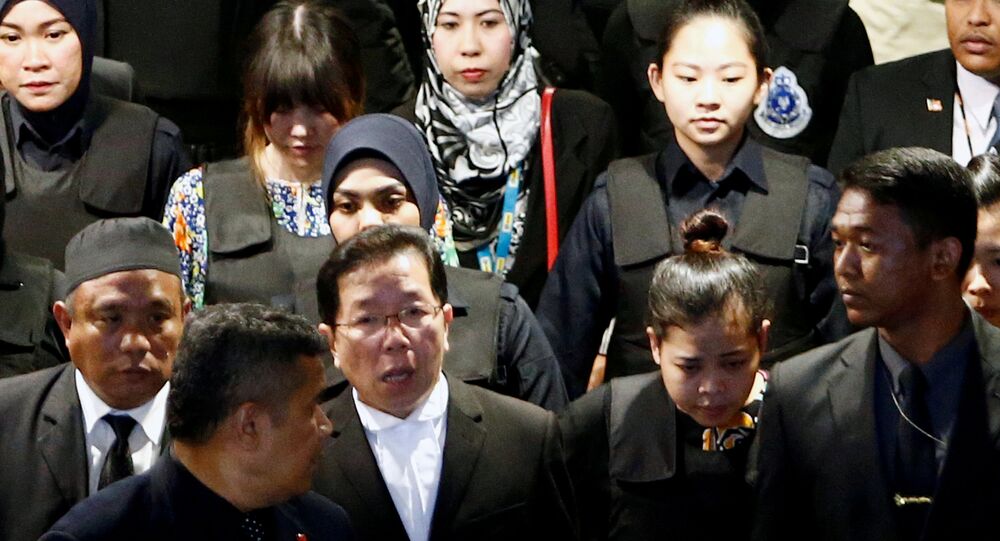 The suspects accused of murdering Kim Jong-un's half-brother have been taken back to the crime scene in Malaysia but the situation got out of control, leading to chaos and tears.

Two women accused of Kim Jong-nam murder with the deadly nerve agent VX visited the scene of the crime on Tuesday, October 24. The visit to Kuala Lumpur's international airport became chaotic as photographers pushed and shoved in an attempt to grab photographs of Siti Aisyah and Doan Thi Huong, who were brought to the terminal building in handcuffs and wearing bulletproof vests to protect them from a sniper's bullet.

The terminal remained open throughout the three-hour tour and passengers looked on with bewilderment as 200 armed police officers escorted the defendants, judge, prosecutors and defense lawyers.

At one point Siti Aisyah burst into tears, whilst Doan Thi Huong looked unwell throughout the entire experience.

"They had to wear bulletproof vests, it is heavy, we walked for three hours. Siti Aisyah and Doan were exhausted," said Gooi Soon Seng, a lawyer representing Aisyah.

"The exercise today is to see for ourselves the actual locations and which cameras recorded the scenes," said Mr. Gooi.

The pair, who were pushed around the terminal concourse in wheelchairs, have both pleaded not guilty to murdering Kim Jong-nam, half brother of North Korean leader Kim Jong-un.

© AP Photo /
Indonesian suspect Siti Aisyah, center, in the ongoing assassination investigation, is escorted by police officers as she arrives at Sepang court in Sepang, Malaysia on Wednesday, March 1, 2017

Lawyers for Siti Aisyah, who is from Indonesia, and Doan Thi Huong, who is from Vietnam, claim they were duped by several men who have since fled the country.

Both women are believed to have been North Korean agents, acting on orders from leader Kim Jong-un.

The pair both claim they thought they were working on a TV prank show and had no idea the substance they were asked to smear on Kim Jong-nam's face was a deadly chemical.

High Court Judge Azmi Ariffin visited the check-in kiosk where the women were caught on camera smearing a liquid onto Kim Jong-nam's face on February 13 as he waited for a plane.

© REUTERS / Lim Se-young/News1
People watch a TV screen broadcasting a news report on the assassination of Kim Jong-nam, the older half brother of the North Korean leader Kim Jong Un, at a railway station in Seoul, South Korea, February 14, 2017.

The judge was then shown the route the victim walked to the airport clinic, where he sought help, and then retraced the movement of the two women, who were seen rushing towards restrooms where they washed their hands.

Prosecutors claim the fact that the women rushed to the restroom to wash their hands shows they knew they were handling a deadly poison.

A chemical weapon expert has told the trial VX can be removed by careful washing within 15 minutes of exposure.

"I believe the visit to the crime scene will help strengthen the prosecution's case because it will allow the judge to follow the women's trail and understand why they took that path," said prosecutor Wan Shaharuddin Wan Ladin.

The trial will resume on Wednesday, October 25, with the police's chief investigating officer being cross examined by the defense in the courtroom.

The Malaysian government abolished trial by jury in 1995 and the verdict will be delivered by the judge, after he has heard all the evidence.

Kim Jong-nam left North Korea years ago and resided in Macau, where he had business. Before leaving the country he was considered as the main candidate for succeeding Kim Jong-il.