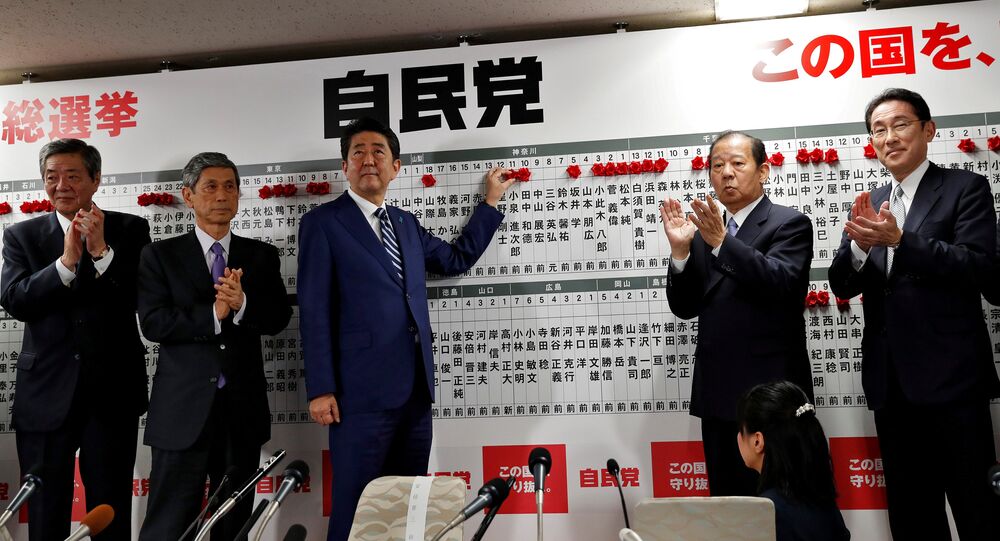 © AP Photo / Shizuo Kambayashi
Abe: Snap Parliament Election to Provide Mandate for Tough N Korea Policy
The election, which was announced last month by the prime minister, comes amid confusion in the opposition camp and a soar in Abe's rating that saw a downtick earlier this year after a suspected cronyism scandal.

Abe's LDP party is set to advocate for amendments to the country’s post-war constitution. In its current version, the constitution's Article 9 drafted by the US, bans the maintenance of armed forces. However, the Japanese government has managed to establish military forces that are used exclusively for self-defense. Moreover, in 2015 the government passed a bill, allowing the country's forces to fight abroad thus "defending the country's allies in case of war being declared upon them."

Commenting on the plans, Shinzo Abe said on Sunday that the decision regarding amendments to the country's constitution would not be made solely by the ruling coalition.

"We have set 2020 as our target year for amending the constitution, but we will put efforts to ensure the support of many people [for amendments] not by setting the deadline itself, but through enhancing discussions," Abe explained.

In order to amend the Japanese Constitution, it is necessary to receive the approval of two thirds of the deputies of the Japanese Parliament's both houses, after which the amendment is submitted to a referendum. The two-thirds of votes in the lower house is also sufficient in order to pass any bill by the second vote, even if it is rejected by the upper house.

The prime minister has promised to make all necessary efforts to tackle the North Korean crisis that has escalated in recent months due to the nuclear and missile tests performed by the latter.

© REUTERS / Toru Hanai
Abe: Japan's Parliament Dissolved Over Escalating North Korean Threat
According to the Interior Ministry, a total of 29.99 percent of voters cast their ballots in the general vote, which is a 4.99-percent decrease, compared to the vote held in 2014.

The voter turnout was hindered by heavy rains and strong winds caused by the approaching typhoon. In addition, severe weather conditions disrupted marine traffic, which caused a delay in the delivery of ballot boxes from the remote islands of Matsuyama, Saga and Yamaguchi prefectures, which held the general election on Saturday. The ballot counting for these voting districts will be held on Monday