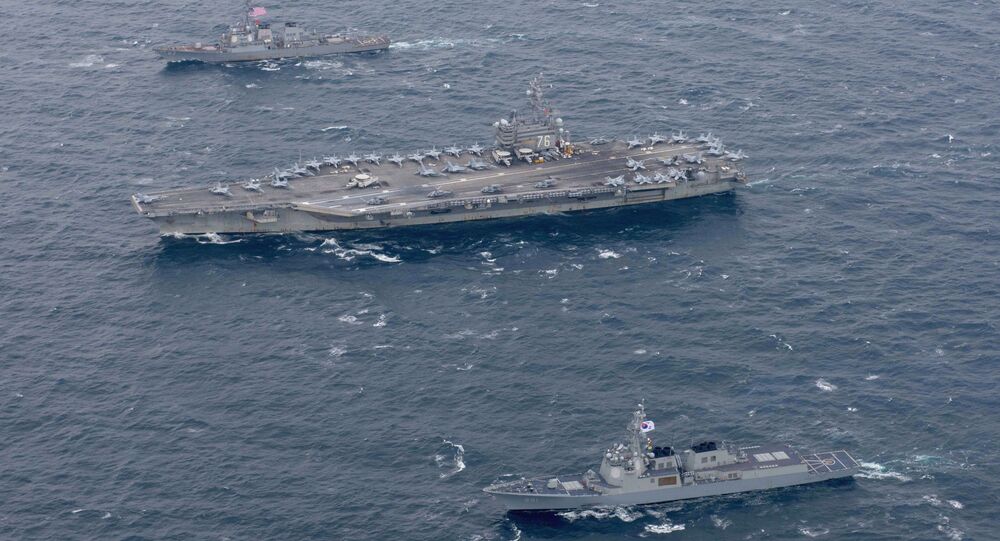 Pyongyang could stage an unprecedented strike on the US at an unexpected time, the North Korean state run news agency KCNA warned on Thursday. The threat came as the South Korean and US navies conduct massive joint drills amid increasing tensions over the north's nuclear and missile ambitions.

As the US aircraft carrier USS Ronald Reagan appeared in the waters off the Korean Peninsula, North Korea's emergency committee for opposing nuclear war drills condemned the joint move between the US and South Korea to mobilize strategic nuclear assets near the peninsula, Yonhap News Agency reported.

"The US is running amok by introducing under our nose the targets we have set as primary ones. The US should expect that it would face unimaginable strike at an unimaginable time," the Korean Central News Agency warned.

© AP Photo / Eugene Hoshiko
North Korean Official: We Won’t Negotiate Until We Can Strike US East Coast
The KCNA accused the US and "its South Korean puppet forces" of intentionally driving the tension to the verge of explosion with their maritime drills in the Yellow Sea and the Sea of Japan, which it described as the "largest ever."

"The South Korean puppets will not go scot-free as they are introducing strategic US nuclear assets and turning the whole land of South Korea into the worst-ever field of a nuclear war, without seeing the imminent catastrophic disaster," the KCNA added, pledging that the North will mercilessly smash the "war frenzy" with concerted efforts and inflict "the most miserable death" upon the invaders.

On Monday, the US and South Korean navies kicked off a five-day round of military drills, featuring the USS Stetham and the USS Mustin guided-missile destroyers, as well as the USS Reagan supercarrier.

​The joint US-South Korea drills, dubbed the Maritime Counter Special Operations Forces Exercise (MCSOFEX), are said to "promote communications, interoperability, and partnership" between the militaries of the two countries.

Moreover, the US Forces Korea announced that it would coordinate with the US State Department and South Korean military in a drill to evacuate non-combatant US citizens from South Korea, dubbed "Courageous Channel," denying having direct ties to the present situation. The North Korean state-run news agency warned, however, that "reckless military gambling against the DPRK" may result in the "total destruction" of the US.

​Tensions in the area have previously soared amid North Korea's nuclear and missile tests and increasingly bellicose "exchange of pleasantries" between the North Korean leadership and US President Donald Trump. Kim Jong-un called Trump a "mentally deranged US dotard" and pledged to "tame him with fire," while the US president called the North Korean leaders a "little rocket man on a suicide mission."

​Furthermore, Kim Jong-un has vowed to take "highest-level" measures against Washington, as Trump threatened to "totally destroy" the country of 26 million, should the US be forced to defend itself and its allies from Pyongyang's nukes.

© REUTERS / KCNA
North Korea Says US Actions 'Forced' Pyongyang to Create H-Bomb
Secretary of State Rex Tillerson said, however, that President Donald Trump had personally instructed him to continue diplomatic efforts to calm the rising tensions with North Korea, pledging that the diplomatic efforts will continue "until the first bomb drops."

North Korea fired two intercontinental ballistic missiles in July and conducted its sixth and most powerful nuclear test in September.

Nearly 28,000 US troops are currently deployed in South Korea due to the North’s perceived threat.