The Indian government has come under fire once again for making it mandatory for citizens to use their Aadhaar (unique identification number) to collect social welfare benefits after an 11-year-old who was denied subsidized food allegedly died of hunger.

New Delhi (Sputnik) – Indian authorities have initiated a probe into the cause of the death of an eleven-year-old girl whose mother has alleged that the girl died of starvation as the family was denied a ration due to a glitch in the system that allows poor families to obtain subsidized food grains.

11-year-old Santoshi Kumari belonged to a family identified by authorities as BPL (Below the Poverty Line) in Karimati village in Simdega district in the eastern state of Jharkhand. She died on September 28. Her mother, as well as social activists, have alleged that the family had lacked sustenance for many days. They did not get food because their Aadhaar number was not seeded with their ration card. Aadhaar is a unique identification number issued to Indian citizens which contains their biometric details. 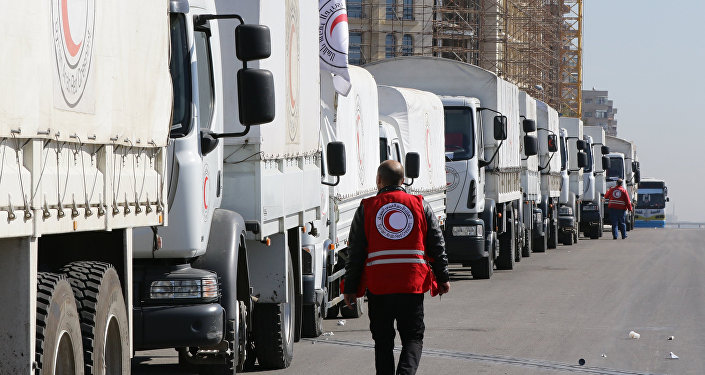 © AFP 2019 / LOUAI BESHARA
Residents of 4 Syrian Towns May Face Starvation Without Aid Deliveries - UN
In February this year,  India made seeding the Aadhaar number with the ration card compulsory for getting subsidized food through the Public Distribution System. Therefore, pursuant to this order, various state governments stopped providing ration to those who had not linked their ration card with their Aadhaar numbers.

The government came under harsh criticism for introducing such draconian prerequisite for citizens’ access to welfare schemes, prompting the country’s highest court to direct the government to remove such conditions.

However, despite the court’s directives, the state government of Jharkhand abruptly canceled the ration cards of hundreds of BPL families.

When asked by Sputnik, Food and Civil Supplies Minister of Jharkhand Saryu Rai said that “The state government has issued an order that each and every eligible person will get rations despite their ration card is not linked to the Aadhaar number. The government will inquire into whether the death was due to starvation or if there was some other reason.”

The Aadhaar (Targeted Delivery of Financial and Other Subsidies, Benefits and Services) Bill of 2016 is mainly aimed at providing for the efficient, transparent, and targeted delivery of subsidies, benefits and services to its intended beneficiaries, plugging leakages. However, there are many problems in the system that have marred the very intent of the scheme, throwing open a major challenge to the Indian government.