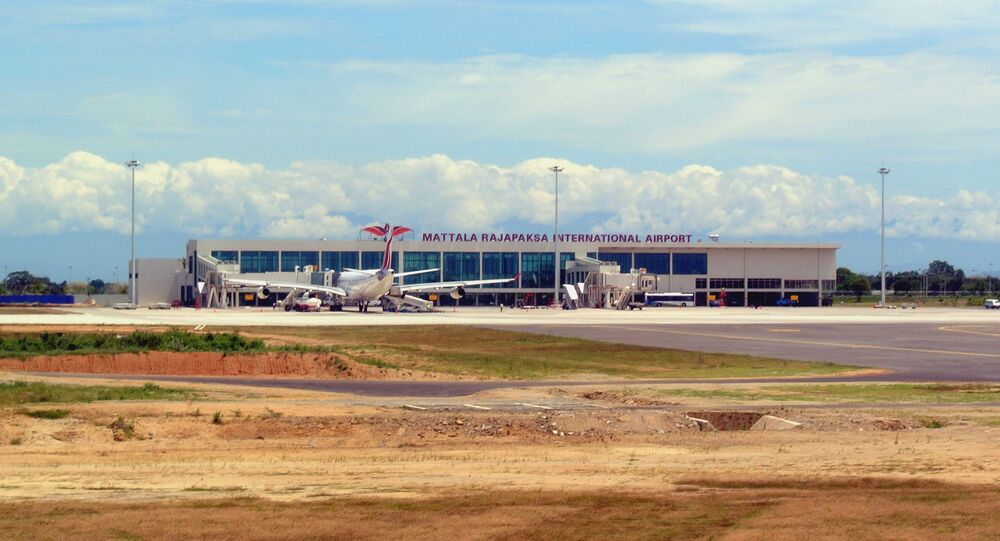 India and Sri Lanka are close to finalizing a joint venture to manage and expand facilities at the Mattala Airport, which is situated near the Hambantota Seaport, a key port in China’s multi-trillion dollar Belt and Road Initiative.

New Delhi (Sputnik) — Sri Lanka had been scouting for alternate investors for the Chinese-built airport, which began operations in 2013.The airport can handle a million passengers but has not been able to use even 5 percent of its passenger handling capacity. The cargo service has also been extremely under-utilized, with just 69 metric tons moved in 2016 despite an annual capacity of 45,000 tons.

China invested $230 million in the airport, built at a total cost of $253 million. China had reportedly bid to operate the airport, but couldn't reach an agreement over financial conditions set by the Sri Lankan government.

"It was during this time that India came up with a proposal. They were ready for a joint venture with the Airport and Aviation Services," Reuters quoted Sri Lankan Civil Aviation Minister Nimal Siripala as saying.

© AP Photo / Gurinder Osan
India Appoints One of its Most Astute Diplomats as Ambassador to China
India's revival plan for the Mattala Airport includes a plan to start a flight school and a maintenance hub at the airport to boost revenues while it builds up traffic. The size of the joint India-Sri Lanka investment in the airport is estimated to be around $293 million initially, of which India will cough up around 70% for a 40-year lease. India's multi-conglomerate GMR has shown interest in the airport's operations.

China, however, may not like to lag behind as the nearby Hambantota Seaport is part of the country's multi-trillion dollar infrastructure-related Belt and Road Initiative. China has a 99-year lease of the seaport. Beijing also plans to build an investment zone and a refinery, the largest in Sri Lanka.

© AFP 2020 / Frederic J. BROWN
Battle for Ecology: How China, India Can Wrestle Down US Nixing Paris Deal
China is struggling with the local opposition as residents face eviction to make way for the projects. Indian experts say Chinese projects, which are backed by the financial support of its government, have pushed Sri Lanka into a vicious long-term debt trap.

New Delhi had pointed to this major weakness in China's model of development when it declined to join the Belt and Road Initiative.

"Our government took a principled stand when it declined China's offer to join the Belt and Road Initiative. We also pointed at the long-term sustainability of many of these projects from both a financial and environmental point of view. Sri Lanka is already facing many of the issues which we feared are part and parcel of Beijing's Belt and Road Initiative," Smruti Pattanaik, Research Fellow at the Institute for Defense Studies and Analyses, told Sputnik.

India has reportedly given very flexible options to Sri Lanka to determine New Delhi's size of the stake and decide on a partner company for operating the Mattala Airport.

India, China Backed by Over 100 Countries in Effort to Eliminate Farm Subsidies