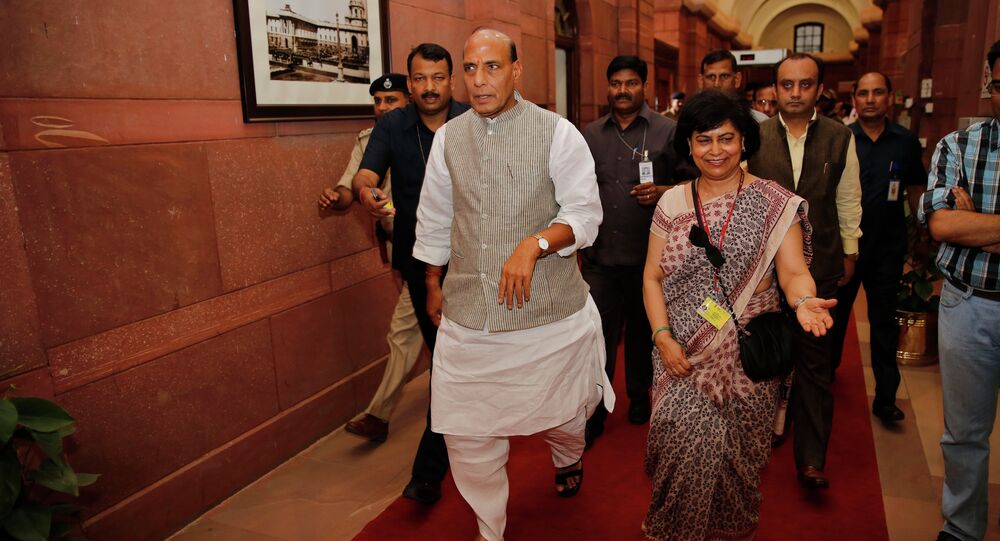 India's Home Minister has said the Union Government is ready to stop the ongoing operation against leftist rebels and integrate them into the mainstream, provided they agree to shun violence.

NEW DELHI (Sputnik) — India's Minister for Home Affairs, Rajnath Singh has said that the government is ready to hold peace negotiations with the leftist rebels, provided they lay down their arms. The union government's expression of willingness for dialogue comes at a time when the security forces have gained significant success in containing the violence by leftist insurgents (Maoists) active in many pockets of the country.

There has been over a 50% decline in incidents of Maoist violence between 2010 and 2016, according to the Ministry of Home Affairs.

"We are ready to have a dialogue with the Maoists and the only condition is that they must shun violence before we can sit across the table," Minister Rajnath Singh told the media.

Experts say that Singh's gesture is positive and an opportunity for Maoist guerrillas (locally known as Naxals) to join the mainstream.

"The government aims to push development in districts facing severe poverty and alienation. But that cannot happen unless the violence ends. The government is very positive in its approach despite having an upper hand and the Naxals must seize this opportunity to join the dialogue process. But as the home minister very clearly says they have to come to the dialogue table and give up arms to have any meaningful discussion," P.K. Mishra, Former Additional Director General of Border Security Force, and an expert on left-wing extremism in India, told Sputnik.

However, he cautioned that the Maoists might take undue advantage of the ceasefire if not tackled wisely.

"It might be possible that the Naxals will use the ceasefire to regroup and consolidate in the areas where they have lost territory and influence. The government cannot let that happen," Mishra added.

Meanwhile, official data shows that incidents of Naxal violence have declined by over 22% in the first nine months of 2017 on a year-to-year basis.

A report in a local daily "Telangana Today" suggested that the Communist Party of India (Maoist), the parent organization of Naxals across India, in a review meeting in February this year, acknowledged that its armed struggle was facing a "difficult" phase.

According to the newspaper, there are 16 Naxal strongholds across India and the movement (insurgency against the Indian state) has suffered in the last few years as there has been a massive and concerted crackdown against leftist rebels with central para-military forces taking the lead.

During the period between 2010 and 2017, Maoist casualties, surrenders, and arms recovery spiked, hitting a peak in 2016, according to home ministry data.

"While there have been major incidents of Naxal violence against security forces this year, the overall trend has been on the decline," Mishra added.