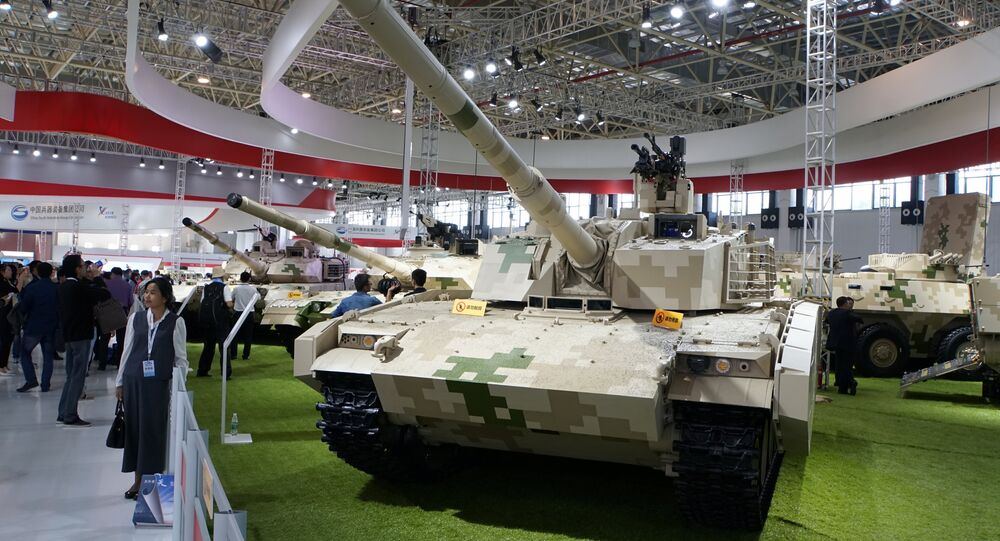 China has delivered the first batch of 28 VT-4 tanks to Thailand, bought by Bangkok for almost $148 million. Russian expert Elena Fomicheva explained to Sputnik that it is no coincidence that the move comes shortly after Thai Prime Minister visited the US, and suggested what the events might signify.

The tanks, better known as Main Battle Tanks (MBT3000), arrived on Monday at the navy's port at Sattahip in Chon Buri province, according to the Bangkok Post. They were ferried further to the Royal Thai Army Cavalry Centre at Adisorn military camp in Saraburi for inspection. They are set to be commissioned at the 3rd Cavalry Division at the Prem Tinsulanonda Military Camp in Khon Kaen's Nam Phong district.

1st batch of Chinese VT4 tanks have been handed over to Thailand pic.twitter.com/d11MZY7vvb

​Commenting on the issue, Research fellow at the Institute of Oriental Studies at the Russian Academy of Sciences Elena Fomicheva noted to Sputnik China that the delivery comes shortly after Thai Prime Minister Prayut Chan-o-cha visited the US. Last week he met with Donald Trump in Washington in an attempt to reinvigorate the relationship between the two countries, which has been strained since the 2014 coup.

The visit has been read by some as a major thawing in the US-Thailand alliance. Ahead of the trip, Thailand’s army chief Chalermchai Sitthisart said that hat the US government had approved a Thai purchase order for four Sikorsky Black Hawk helicopters.

© AP Photo / Wason Wanichakorn
US, Thailand Discuss N. Korea at Strategic Dialogue - State Department
Elena Fomicheva recalled to Sputnik that the purchase of the Chinese-made tanks comes after Ukraine failed to deliver its Oplot T-84 tanks as promised. Only 10 Ukrainian tanks have been sent to Thailand over the past three years and they are now kept at the 2nd Infantry Division in Sa Kaeo province.

It was expected, she said, that the rest of the demand would be supplied by the US, however, China appears to have stepped up to the plate instead.

"The patronizing tone of Barack Obama in his dialogue with Thailand actually cleared the way for China to expand its military supplies to this country," she said, noting that in late June, the Thai Navy announced that it was going to purchase three S-20 submarines from Beijing worth $1 billion.

"With these purchases, Thailand has strengthened its ties with China. At the same time, it has sent a message to the US, which should always remember that Bangkok is its ally," she said.

© AFP 2021 / SERGEY BOBOK
Thailand Says 'No Thanks' to Ukrainian Tanks, Chooses China Instead
The expert further explained that the negotiations on the deliveries of Chinese tanks, worth 4.9 billion Thai baht (almost $148 million) have been going on for a long time. However, the attitude within Thailand towards the purchases of the tanks and submarines from Beijing is dubious. Some analysts attribute it to the military who are currently in power in the country and who spend large amounts of money on the army.

Democratic political circles, she said, do not like the idea.

Elena Fomicheva also said that while visiting the US, Prayut Chan-o-cha assured Washington that the US remains its closest ally, but at the same time, Bangkok has made it clear that Americans should not overestimate themselves. Thailand can easily find other partners for military cooperation, specifically China.

China, in turn, has taken advantage of the short-sighted policy of the previous US administration and has taken the role of arms supplier to Thailand. So far, it has been unable to fully squeeze the US out of its niche as Bangkok is bound to long-term military ties with Washington, which depends on arms supplies from the US due to the compatibility of the weaponry, spare parts and maintenance, as well as personnel training.

© AFP 2021 / Yoshikazu TSUNO
Thai PM Set to Speed Up Thailand-China Railway Project
Nevertheless, China has made a breakthrough into the Thai arms market while the US has been unable to offer anything tangible to the country.
Thailand also did not appreciate the US' appeal to takes sides against China, the expert said, something which the other countries of the region also dislike.

Thailand's negotiating positions with the US are stronger when it has some support from China. This balancing act provides certain advantages to Bangkok, and also allows China to strengthen its positions, she concluded.