General Electric's (GE) big-ticket deal on constructing nearly 1,000 diesel locomotives in India was at risk after the country's newly-appointed railway minister decided to alter the provisions of the contract with the corporation. However, the project was eventually launched.

New Delhi (Sputnik) — Following days of uncertainty, the first diesel locomotive made by American firm General Electric has arrived in India. As part of the $2.5 billion deal, 960 diesel locomotives will be manufactured in India at a plant set up in the eastern state of Bihar.

"It is the first of 40 locomotives that have been imported to India from the US. The remaining 960 will be built at GE's Brilliant Factory, which is being constructed at Marhowra in Bihar, and will open in 2018," GE said in a statement. 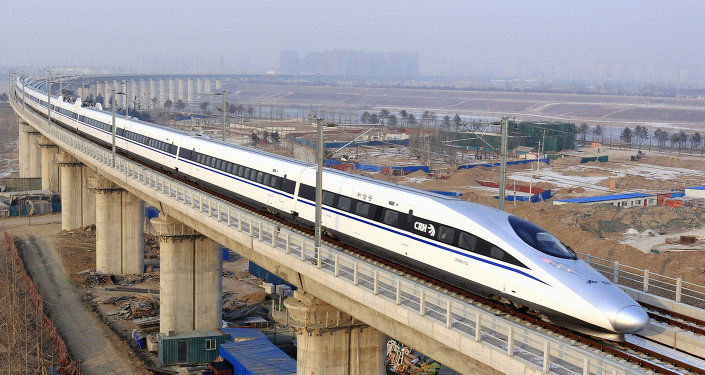 © AP Photo / Xinhua, Jiao Hongtao
India to Get Its First Japanese-Modeled Bullet Train by 2022
Last month, the American firm threatened to scare foreign investors away from the Indian government after newly-appointed Railway Minister Piyush Goyal proposed to alter the contract and asked GE to make electric locomotives rather than ones with diesel engines.

However, the issue was resolved following lobbying by the local government of Bihar, which is under intense pressure to set up large industries in the state to generate employment for local youth.

"Through this project, we're creating a robust supply chain ecosystem in India and will localize more than 70 percent of all content. We're proud of the more than 6,000 jobs that have been created by GE in Bihar and Uttar Pradesh, and remain committed to our work in the country," Vishal Wanchoo, President and CEO of GE South Asia said.

Indian Railways, which services 23 million passengers daily with its 19,000 trains, aims to remove all diesel locomotive trains from the system by the end of 2020 to save fuel costs and curb pollution. Fund-starved Indian Railways expects to save close to $1.7 billion by phasing out diesel-powered trains, which consume $2.7 billion annually on fuel expenses.