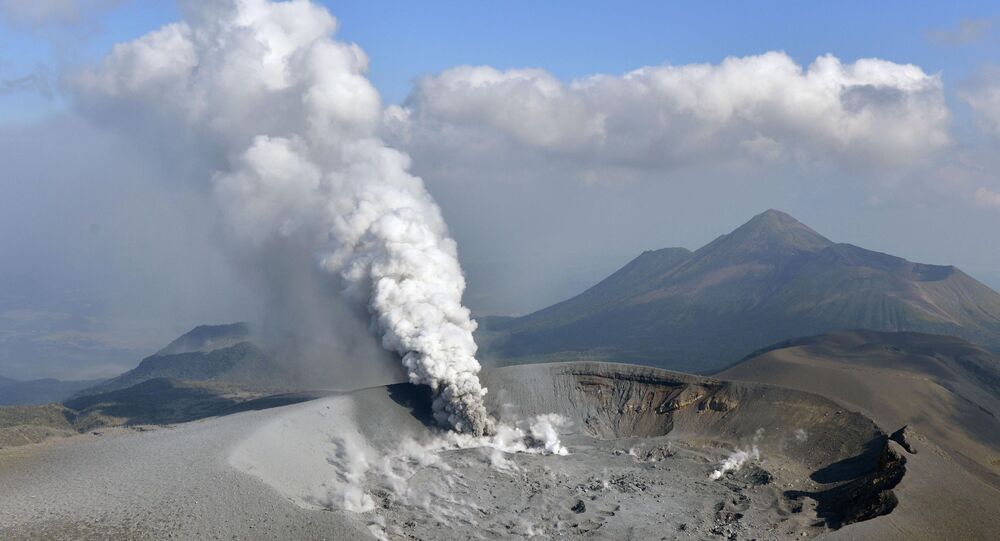 For the first time in six years the Shinmoedake volcano, situated in between Japan's Kagoshima and Miyazaki prefectures, erupted early Wednesday, prompting officials to raise its volcanic alert rating to Level Three.

Working on a five-point scale, the current status commands locals to steer clear of the crater. The highest rating, a five, would trigger a mandatory evacuation of the region.

Restricting residents from Mount Shinmoedake's crater, the Japan Meteorological Agency reported that upwards of 100 volcanic earthquakes were observed since October, the Japan Times reported. On October 5, 90 small tremors were reported near the mountain.

​According to reports, the volcano began to spew smoke and ash at roughly 5:34 a.m. local time, and a volcanic plume rose about 300 meters above the crater. Citing local police, the outlet added that ash fell on a town in Miyazaki but no injuries or damages were reported.

The meteorological agency later warned that the situation could worsen as researchers noted that the mountain was "swelling."

​Recalling the last eruption that residents witnessed, Yoshinari Imanishi, a 66-year-old official in Takaharu, told the media he was concerned about the effects the volcano could have on the local tourism industry.

"We were hit by cancellations of accommodations [for] six years," Imanishi told Kyodo News. "I hope [the eruption] will not affect autumn outing season."

​According to the Times, the agency lowered the volcano's alert level from two to one on May 26 after its volcanic activity at the time had ceased.

The the last major eruption of Shinmoedake was on January 2011, and prolonged volcanic activity had officials paying close attention to the site for much of the year after the volcano erupted for a second time on September 7, 2011.

'It Broke My Heart': First-Hand Accounts of Ambae Evacuation Amid Volcano Threat

Over 6,000 People Evacuated in Vanuatu Over Volcano Eruption Alert