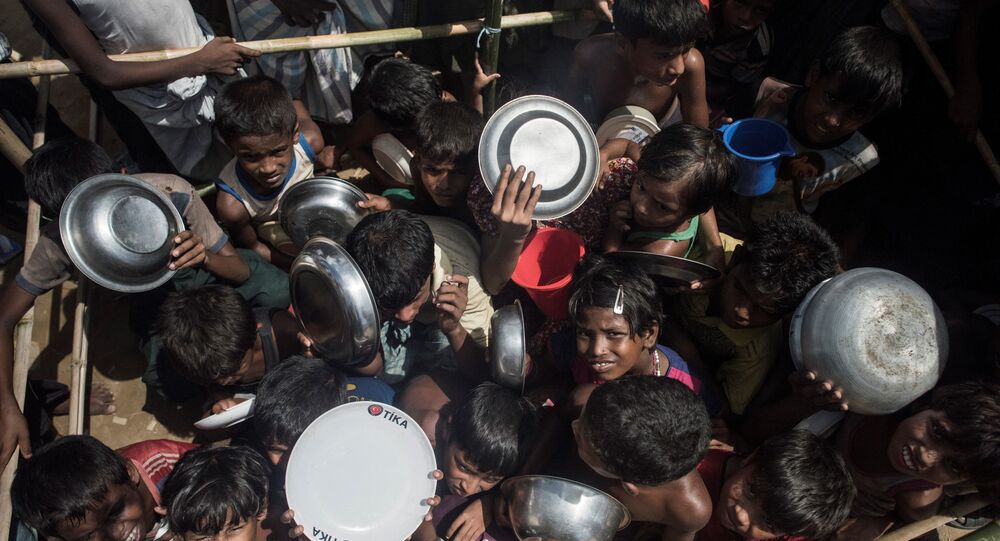 Press TV, referencing a UK charity, have reported that the majority of the 145,000 Rohingya children who have fled to Bangladesh to escape the violent military crackdown by the Myanmar authorities are suffering from severe malnutrition.

According to the Disasters Emergency Committee charity, there are also over 50,000 pregnant and breastfeeding Rohingya women who are in desperate need of proper nutrition.

A spokeswoman for Save the Children humanitarian response team in Bangladesh described the fast-growing influx of refugees from Myanmar as the biggest challenge to efforts to save the young refugees and their families.

© AP Photo / Dar Yasin
Despite Repatriation Efforts Rohingya Refugee Crisis Far From Being Over
“It’s truly staggering,” she said, adding that an average of 10,000 Rohingya refugees had been coming in over the past six weeks adding to some 200,000 already in Bangladesh before the latest wave arrived.

According to World Food Program representatives working on the ground, the constant and rapid flow of people is overwhelming Bangladesh, which has been particularly hard hit with rains that have resulted in heavy flooding and interrupted aid operations.

Bangladesh still plans to expand a massive settlement in the south to accommodate nearly the 900,000 Rohingya Muslim refugees that have streamed into the country from Myanmar.

Over half a million Rohingyas have fled Myanmar since August 25 amid the recent spike in violence in the country’s western state of Rakhine.

© REUTERS / Mohammad Ponir Hossain
'Atrocities Demand More Than Words': HRW Blames Myanmar Army for Rape, Murder of Rohingya People
The Rohingya Muslims are not recognized as citizens by Myanmar and are largely seen as illegal immigrants originating from Bangladesh.

The conflict between the country’s Buddhists and Muslims, which actually originates from the 19th century, intensified on August 25, 2017, when Muslim insurgents of Rohingya origin attacked security posts in Rakhine.

The attacks prompted a vicious response by Myanmar’s authorities, resulting in clashes and death of hundreds of Rohingya, while hundreds of thousands have fled the conflict area.