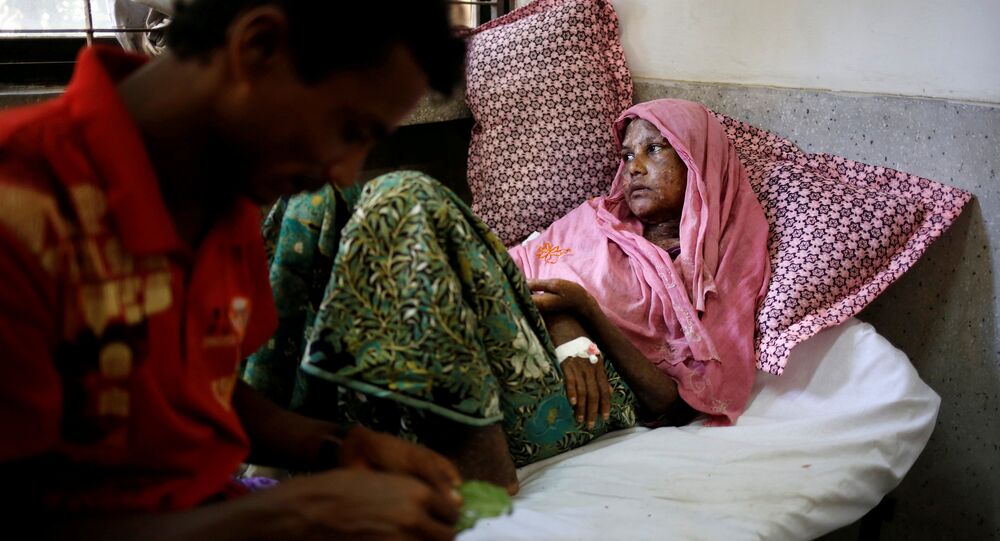 At least a hundred Rohingya Muslims were executed and sexually assaulted by Myanmar's military during a raid in late August, according to a Human Rights Watch (HRW) report.

A HRW report, in turn, said "soldiers had beaten, sexually assaulted, stabbed, and shot villagers who had gathered for safety in a residential compound" in western Myanmar on August 27.

© AFP 2021 / MUNIR UZ ZAMAN
Bangladesh Awaits Myanmar’s Response to Rohingya Repatriation Proposal
The document quoted one of the survivors of the raid as saying that many residents of the village "were stabbed to death" as the soldiers "were clearing the jungle with their thin, sharp, and long knives."

The survivor was echoed by Robertson, who cited the near-total destruction of the village in the wake of the raid.

"The soldiers loaded the bodies – some witnesses said a hundred or more – into military trucks and took them away," he said.

Myanmar refuses to recognize the Rohingya Muslims as citizens, mainly seeing them as illegal immigrants from Muslim Bangladesh.

Screenshot/Martin Swe
Myanmar Beauty Queen Dethroned After Making Comments on Rohingya Crisis (VIDEO)
The Rohingya crisis, which had its origins in a conflict dating back to the 19th century, intensified on August 25, 2017, when Muslim insurgents of Rohingya origin attacked security posts in Myanmar's Rakhine State.

The Myanmar army's subsequent brutal crackdown resulted in clashes and the death of hundreds of Rohingya people.  More than half a million Rohingya Muslims fled Myanmar, crossing into neighboring Bangladesh.