No Respite for Indian Military From Chilly Himalayas Amid Chinese Buildup

Reports of a Chinese troops buildup in Doklam despite the disengagement agreement reached between the world's two most populous countries in August have kept the Indian military on its toes, forcing it to stall the annual winter retreat from north Sikkim, a state in northeast India which borders China to the north.

New Delhi (Sputnik) – In a clear departure from earlier practice, this year, Indian military vehicles are still moving up the National Highway 10, that connects the plains of West Bengal with the difficult and vulnerable areas of north Sikkim, carrying ration and reinforcements. Military platforms have been kept in a state of readiness and are deployed at different locations close to the border.

“So far, no instructions have been issued to wind down the operational alert and it could get extended well into the winter,” a top source told the Tribune.

The number of military vehicles moving from the military stations in West Bengal to north Sikkim has reportedly increased markedly in the last few weeks.

“This is not a usual situation, as we are witnessing hundreds of military vehicles still moving towards north Sikkim,” says Kamal, a taxi driver, told Sputnik. Kamal ferries passengers on National Highway 10, connecting Siliguri to Gangtok. 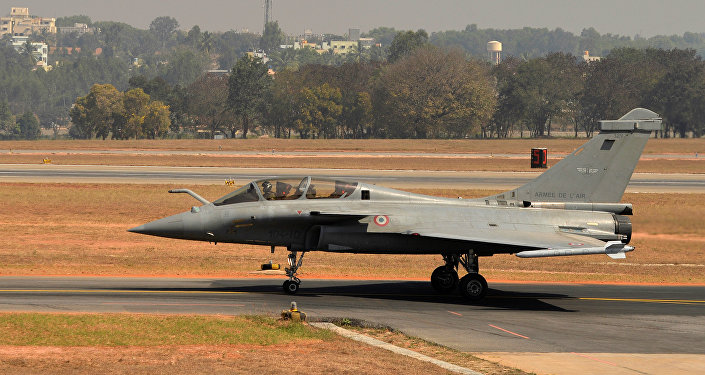 © AFP 2019 / Manjunath KIRAN
India to Station Rafale Jets Within Strike Range of China and Pakistan
At this time of the year, troops deployed at the border in north Sikkim usually partially retreat as the weather conditions are extremely harsh throughout most of the area. The retreat of troops is marked by the huge number of military vehicles moving downhill on a regular basis. However, this time, the reverse is happening.

Kamal, the cab driver, says the deplorable condition of roads linking West Bengal to Sikkim has added to the difficulties faced by Indian troops. Pointing at a military vehicle which had overturned on the highway, he said, "Heavy military vehicles are running on the already-congested 150 km highway which needs repairs urgently, as Sikkim has evolved as a new flashpoint after the Doklam standoff."

Doklam is just a few kilometers from north Sikkim. At least 1,500 personnel of Chinese People's Liberation Army are still reportedly present at the site of the recent standoff despite a bilateral agreement in August to mutually withdraw troops from the area.