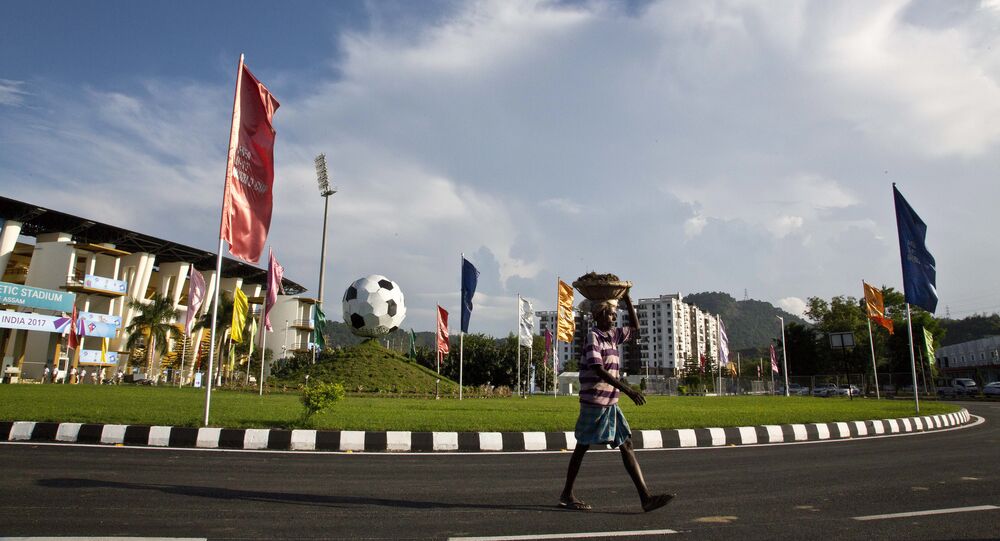 Indian football enthusiasts are eagerly waiting for the first ever FIFA World Cup (U-17) to be hosted by the country which also marks Indian football team’s first participation in a FIFA tournament.

New Delhi (Sputnik) – India is all set to host its first ever global football tournament. Beginning October 6, the FIFA Under-17 Football World Cup kicks off at two venues in Delhi and Mumbai simultaneously.

This is the first time India would be hosting the event in the 87-year-long history of Football World Cup. This would also be the first time for Indian footballers to qualify to the World Cup. The Indian U-17 team led by Amarjit Singh Kiyam has been given direct entry to the tournament given the country’s host status. Kiyam hails from the north eastern state of Manipur.

© REUTERS / Maxim Shemetov
FIFA President Calls on People of World to Visit Russia During FIFA World Cup in 2018
The opening matches in Delhi and Mumbai on Friday will be followed by matches in Goa, Kochi, Kolkata and Guwahati – which represent the main football hubs of India. The finals will be held in Kolkata on October 28.

Officials say care has been taken to ensure world-class infrastructure at all six venues. The preparations are mainly being seen as India’s attempt to offset the criticism it faced when it hosted the Common Wealth Games in 2010. India had attracted a lot of bad press for lapses in management and last-minute preparations for the games.

The tournament has been divided into six groups – Group A to Group F – with four teams in each group.India is placed in a tough group against formidable opponents such as USA, Columbia and two-time champions Ghana. Sports commentators consider India as the weakest of the 24 teams participating in the competition.

“This exposure on the big stage against the best in the world is crucial for players to dream big, grow the game, gain crucial experience as well as improve football facilities and following in the country,” Indian senior team captain Sunil Chhetri told Sputnik.

India has put its under 17 team through a rigorous coaching schedule for the last three years in the run up to the World Cup. The team played more than 50 friendly matches against second-rung squads in Germany, Spain, UAE, South Africa, Luxembourg, France, Norway, Italy, Hungary, Brazil, Portugal, Russia and Mexico as part of its preparation.

The preparations were also marred by a few controversies. Nicolai Adam from Germany, India’s head coach since 2015 was asked to step down few months ago and was replaced by Portugal’s Luis Norton de Matos. All India Football Federation came under severe criticism from fans and enthusiasts for this step.