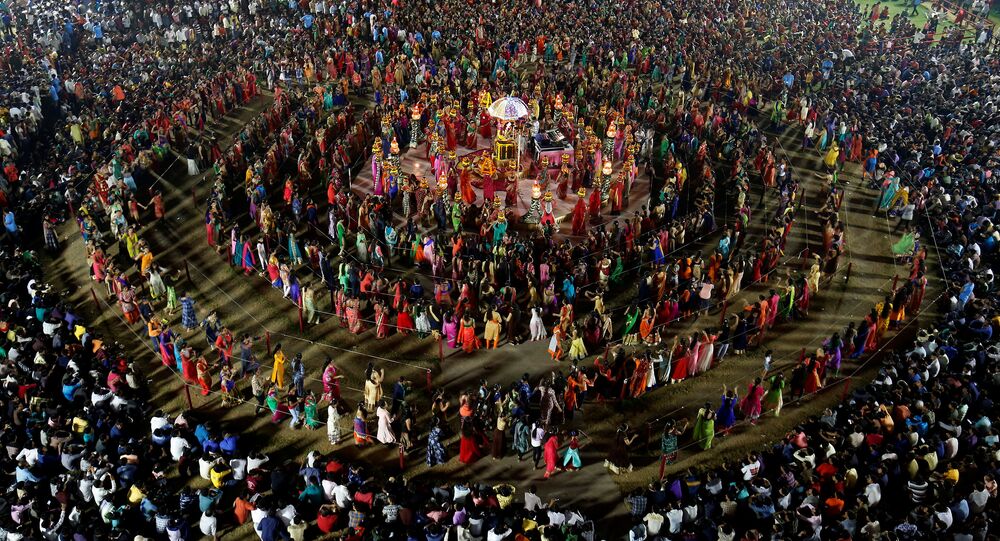 India’s eastern state of Gujarat, to which Prime Minister Narendra Modi belongs, is in the grip of caste-violence ahead of the crucial polls that would elect the state’s new Chief Minister. Two young men were allegedly thrashed by a gang of upper-caste men for sporting a mustache.

New Delhi (Sputnik) — Last week, a youth belonging to the lower caste was allegedly beaten to death by men of the higher caste in the eastern state of Gujarat. Police sources say the victim was returning home late night after performing ‘Garba’ – a traditional dance form performed during the nine-day-long ‘Navratra’ festival that marks the victory of good over evil. The upper-caste men were allegedly against the participation of the lower-caste youth in the dance performance.

© AP Photo / Kamlesh Samani
India Seizes 'Largest Single Haul of Narcotics' to Date on Boat Off West Coast
A few days later, on the eve of the birth anniversary of Mahatma Gandhi known for his message of non-violence, two young men were allegedly thrashed by a gang of upper-caste men for sporting a mustache.

Piyush Parmar and Digant Maheria, who are cousins, were attacked at Limbodara village just 15 kms away from Gujarat state's capital Gandhinagar. Three men involved in the attack have been identified and police have filed a case against them.

“The three men started abusing us when they were walking back. We first ignored, but the upper-caste men kept following us and they came to our house and assaulted us as they repeatedly kept on questioning that how could I sport a mustache despite coming from a lower caste community," Piyush Parmar said.

Youths of the lower caste have taken to the social media to protest the violence and discrimination. Lower caste men have been posting photographs with the mustache as a signal of defiance.

Social scientist feels that caste difference in India is deep-rooted and requires strong measures and conviction to eradicate it.

“Caste violence is not new to India and history has proven that legal measures do not help much in this case. Social harmony will have to be maintained with social groups coming together to condemn such violence and act against the perpetrators and forces which promote it. Misguided youths are often used as a tool to propagate caste biases,” Prof Badri Narayan of the Allahabad-based GB Pant Institute of Social Sciences said.

“In these recent cases, no political patronage of the attackers has been established yet. However, no politician has yet come forward to pacify the situation. The fact remains that political leaders can positively influence in such situation by discouraging caste divisions,” he added.

Last year in July, massive protests had taken place in Una town of the Gujarat following the brutal murder of four lower caste men for allegedly skinning dead cows. The right-wing Hindu outfits that have been violently advocating cow slaughter ban in India for a while now, are the prime suspects in the killing.