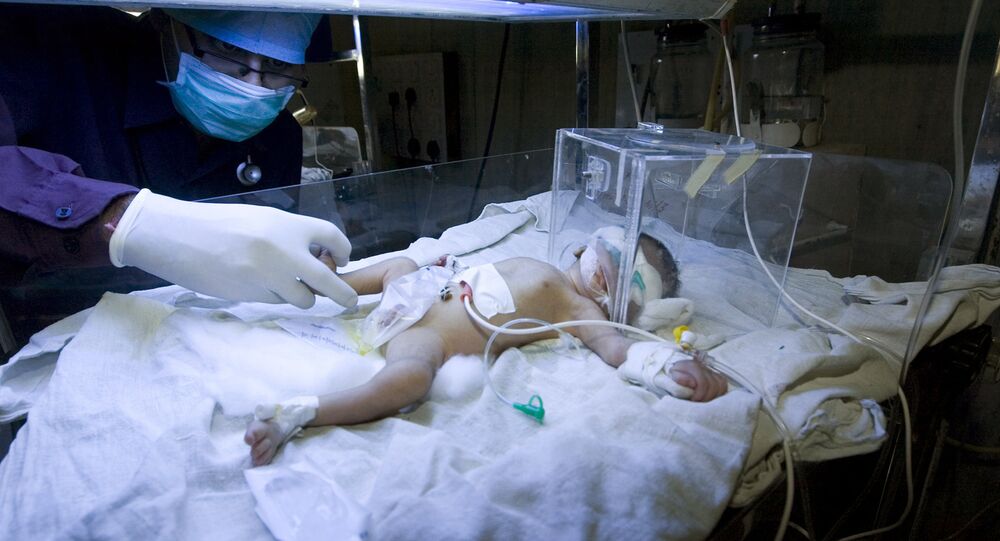 A severely deformed infant died a few hours after birth in an Indian village as desperate parents believe it was their “destiny” while curious villagers called the baby “alien.” Doctors say timely medical intervention would have saved the child.

New Delhi (Sputnik) – The baby boy who was born with massive protruding eyes, holes in place of his nose and no ears died as his parents remained clueless of the cause and remedy of the child’s situation while struggling to let in some air as curious villagers packed their room to get a glimpse of the “alien.”

© CC0
Not Long for This World: 'Alien' Infant Dies in India (SHOCKING VIDEO)
Such incidents are witnessed in India quite often. Doctors say that such children are born across the world but in India, it gathers massive negative attention due to various superstitions attached to such births. The situation often turns into a spectacle rather than a medical emergency and parents are left clamoring for privacy instead of finding a possible remedy to the child’s affliction.

“Neonatal dysmorphology is a common situation across the world but in India, it is more common. Unlike in other countries, here we have the prevalence of superstitious beliefs which hinder with quick intervention and holds back the family from approaching the medical experts,” Dr Sameer Dalwai, chairperson of the Neoro Developmental Pediatrics of the Indian Academy of Pediatrics told Sputnik.

Doctors say such cases are most often curable provided a meticulous clinical examination for identifying the syndrome based on a combination of signs conducted soon after birth.

“The social situation and ground reality in the villages do not always allow it, Dr. Dalwai said.

In the incident which occurred in Uttar Pradesh, the shocked mother could not even breastfeed the child as he kept 'staring at her' all the time while villagers arrived in huge numbers at their home to see the miracle child which they believed was an ‘alien’.

"He was breathing properly and he was healthy. He had healthy limbs but his face was not formed properly,” Karishma, the mother of the child told media.

Meanwhile, Arshad, the child’s father said it was destiny that such child was born to him and that he had no complaints. Experts say that overdependence on “destiny” also contributes immensely to such cases being left unattended.

“A dysmorphic neonate is a cause of concern and anxiety for the parents and as well as for the physician but intervention at the earliest possible time should be ensured. The overdependence on fate and destiny is counter-productive,” Dr. Dalwai said.