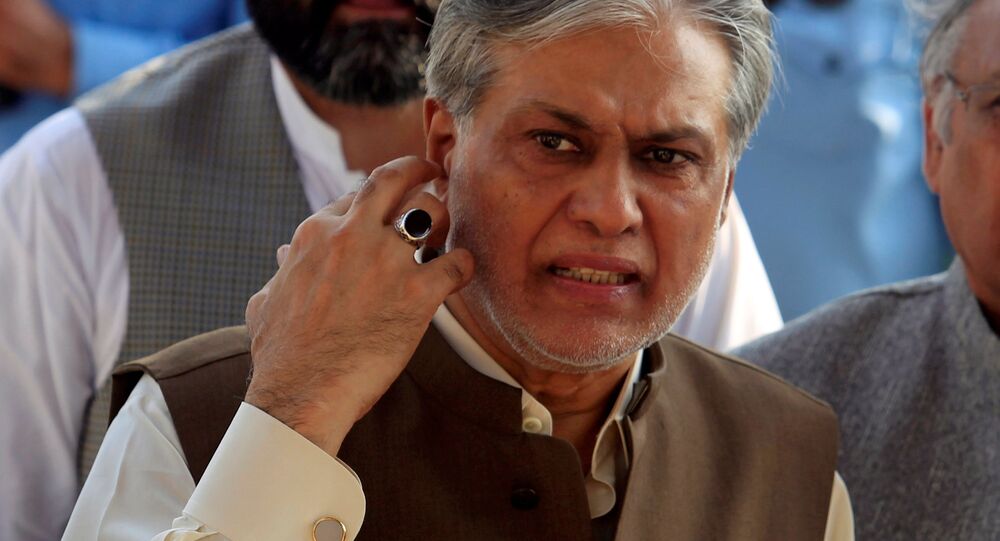 Pakistani Finance Minister Ishaq Dar has been indicted on corruption charges under allegations that he possessed assets beyond his known sources of income. He has pled not guilty to all charges and called the accusations baseless.

Anti-corruption watchdog National Accountability Bureau (NAB), which brought the charges against Dar, said that they had 28 witnesses to call that would be able to support the accusations, the first two being bank officials from Lahore.

"The accused [Dar] has acquired assets and pecuniary interests/resources in his own name and/or in the name of his dependants of an approximate amount of Rs 831.678 million [$7.89 million]," the NAB court filing reads. These assets are "disproportionate to his known sources of income for which he could not reasonably account for."

Dar replied that over the course of the trial he would prove the charges wrong through hard evidence. "I committed no crime. Charges leveled against me are baseless. I shall defend these charges and prove my innocence," he said during his indictment. "My assets are quite within the income limits and I shall prove it."

Dar also asked the court if he could skip his personal appearances during the trial; judge Muhammad Bashir replied that he would take it under consideration. The hearing itself is set for October 4, and Bashir reportedly said that he intended for the trial to take no longer than six months.

"[A lot of] time has already been wasted. The court has to conclude the trial within six months as per the Supreme Court's directions," Bashir said.

Arif Chaudhry, president of the Islamabad High Court Bar Association, told The Hindu that the prosecution's evidence would be key. "The evidence will be judged and defence lawyers will be given an opportunity to present counter evidence to reject the charges," he added.

Other members of Dar's party, the ruling Pakistan Muslim League-Nawaz (PML-N), have come to his defense. "The charges and indictment of Dar is a joke," said Law Minister of Punjab Rana Sanalullah, a PML-N member.

Dar isn't the only one being raked over the coals on suspicions of corruption. Nawaz Sharif, the former prime minister of Pakistan, was disqualified from holding public office for 10 years in July 2017 after the Supreme Court of Pakistan found that he was no longer "eligible to be an honest member of the parliament" when numerous members of his family — but not Nawaz himself — were implicated in financial crimes by the 2015 Panama Papers leak.

Dar and Sharif are longtime associates, with Dar having served as Sharif's minister of commerce during the latter's second term as prime minister from 1997 to 1999. That term ended when a military coup deposed Sharif and sentenced him to life in prison, but the Americans and Saudis intervened to lessen the sentence to exile. For his association with Sharif, Dar spent nearly two years in prison, from 1999 to 2001.