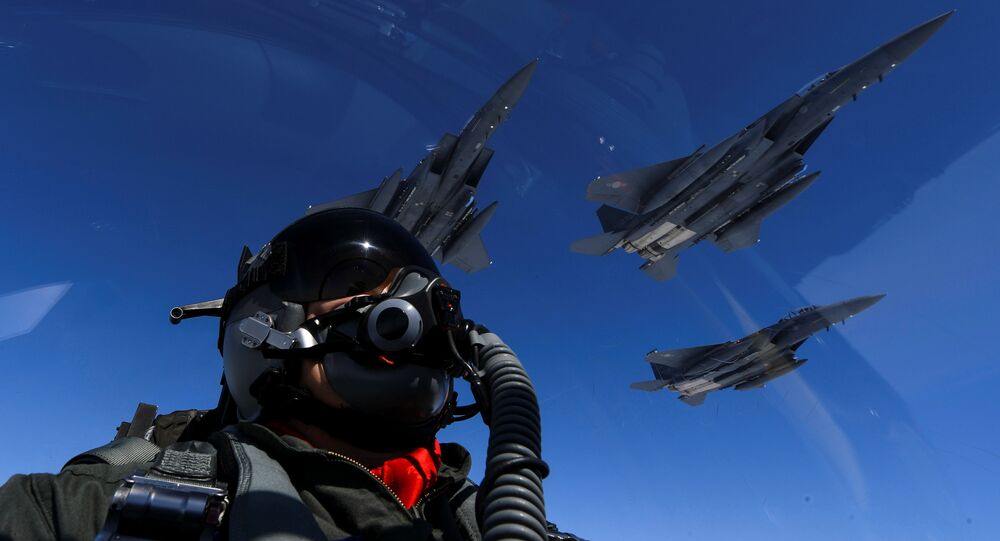 Commenting on the recent escalation of the war of words between the US and North Korea, Beijing urged the two countries to realize that armed hostilities are never a viable way out.

Any potential military conflict on the Korean Peninsula will have no winner, Chinese Foreign Ministry spokesman Lu Kang said on Tuesday at a news briefing in Beijing.

US Air Force/Tech. Sgt. Richard P. Ebensberger
US Bombers Fly Off North Korea's Coast to Display Military Force
The comments come in response to a recent North Korean threat that it has every right to "take countermeasures against the United States, including shooting down American strategic bombers outside the DPRK's airspace, as Donald Trump declared war" on the Asian country.

North Korea's top diplomat Ri Yong Ho said yesterday that what he described as a "declaration of war" by Washington means that Pyongyang could resort to any measures in response.

"The whole world should clearly remember it was the US who first declared war on our country," North Korea's Foreign Minister told reporters in New York.

Also on Monday, the US Department of State's East Asia and Pacific Affairs Bureau spokesperson Katina Adams commented on the statement, saying that the US has not declared war on North Korea.

"We continue to seek a peaceful denuclearization of the Korean Peninsula," Adams told Sputnik, adding that no country is allowed to fire on another nation's aircraft or ships if they are in international space or waters.

© AP Photo / South Korean Defense Ministry, File
China Won't Allow War at Its Door Amid US-S Korea Drills, North's Missile Launch
The war of words between the two countries escalated as US President Donald Trump responded to Ri Yong's UN General Assembly speech on Saturday, where the North Korean diplomat said that Trump would face the negative consequences of his remarks about North Korea and its leader Kim Jong-un. In particular, the Minister said that Trump's policy would make "our rockets' visit to the entire US mainland inevitable all the more."

​Meanwhile, recent reports suggest that North Korean is sending its military jets to the east of the country in the wake of a flyover by US bombers of the area last week.

Last Sunday, the US bombers flew in international airspace off the North Korean eastern coast. This military muscle-flexing was done in order to demonstrate the range of US military options available to Donald Trump, Chief Pentagon spokeswoman Dana White said in a statement.

South Korean National Intelligence Service (NIS), however said that no immediate retaliation was taken by Pyongyang in response to the flyover, suggesting that North Korea "might have failed to fully detect the [US] warplanes," South Korea's Yonhap News Agency reported.