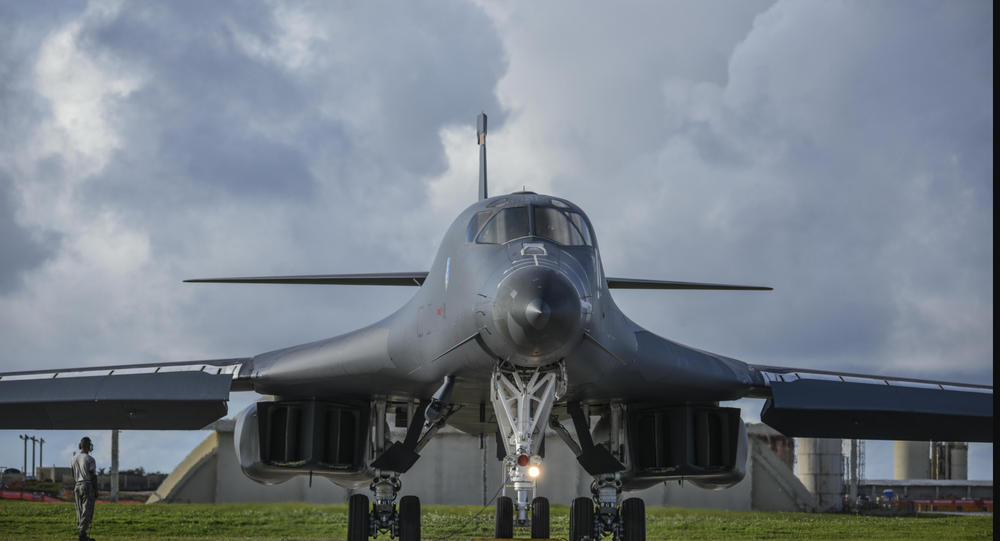 The US bombers flew in the international airspace off the North Korean eastern coast. This military muscle-flexing is aimed to demonstrate the range of US military options available to Donald Trump, Chief Pentagon spokeswoman Dana White said in a statement.

"Earlier today, US Air Force B-1 B Lancer bombers from Guam, along with US Air Force F-15C Eagle fighter escorts from Okinawa, Japan, flew in international airspace over waters east of North Korea… This mission is a demonstration of US resolve and clear message that the President [Donald Trump] has many military options to defeat any threat. North Korea's weapons program is a grave threat to the Asia-Pacific region and the entire international community. We are prepared to use full range of military capabilities to defend the US homeland and our allies," the statement said, as quoted by the NBC News broadcaster.

The spokesperson added that the flights were the farthest north of the Demilitarized Zone any US fighter or bomber conducted in the 21st century.

This step was taken as a response to the earthquake that hit North Korea earlier in the day, that claimed to be connected with nuclear tests. China's Earthquake Networks Center (CENC) said that it detected a 3.4-magnitude earthquake in the northeastern part of North Korea, near the epicenter of the shallow quake caused by Pyongyang's nuclear test on September 3. The seismologists added that the quake's depth was zero kilometers, noting that the earthquake could be caused by a "suspected explosion."

US President Donald Trump said during his recent rally in Alabama that North Korean leader Kim Jong Un should have been handled a long time ago for his nuclear weapons activities.

In his first address to the United Nations General Assembly, Trump on Tuesday threatened to "totally destroy" North Korea if necessary while also issuing sharp warnings to Venezuela and Iran. Trump also called North Korean leader Kim Jong Un a "rocket man on a suicide mission for himself and for his regime."