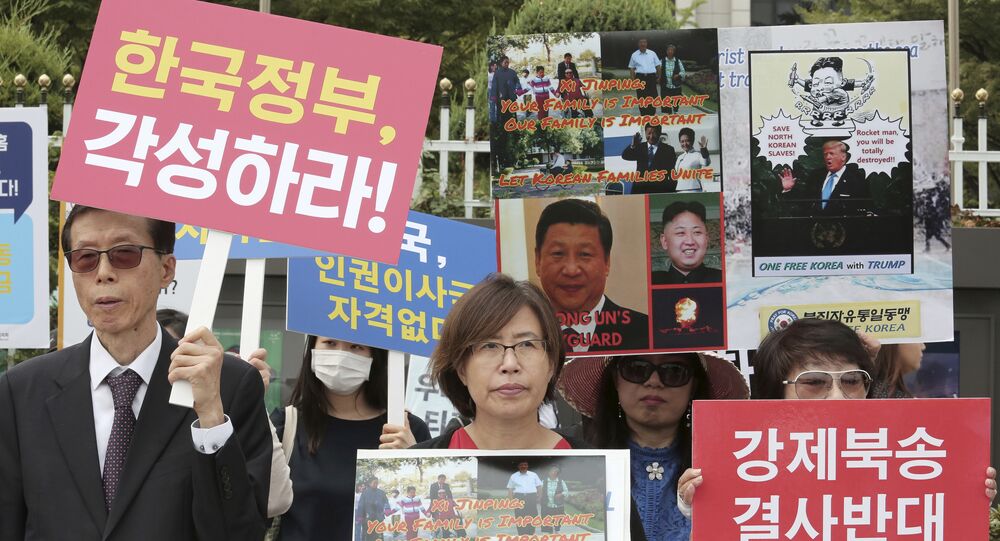 The NHK broadcaster reported Friday that dozens of North Korean defectors were protesting in Seoul against sending humanitarian aid to its northern neighbor.

MOSCOW (Sputnik) — Dozens of North Koreans, who fled to the South, gathered next to the South Korea's Unification Ministry in Seoul to protests against the ministry' plan to provide $8 million of humanitarian aid to the North, media reported Friday.

According to the NHK broadcaster, nearly 30 North Korean defectors, who currently reside in South Korea, gathered next to the Unification Ministry to hold a demonstration against the government's plan to provide humanitarian aid to the North.

© Sputnik / Iliya Pitalev
Seoul Calls for Humanitarian Aid to N Korea Regardless of Int'l Sanctions
The protesters claimed that such step would only "flatter" the North Korean regime which threatens to test the hydrogen bomb in the Pacific. They called on the South Korean government to abandon its plans, stressing that the assistance, if provided to North Korea, would not be given to the population, but appropriated by the authorities.

On Thursday, South Korea’s Unification Ministry said it would provide the North with humanitarian aid worth $8 million. Of this sum, $4.5 million will be allocated through UN’s World Food Programme (WFP) and $3.5 million — through the UN Children's Fund (UNICEF).

Seoul, World Ready to Help N Korea if It Stands on Right Side of History