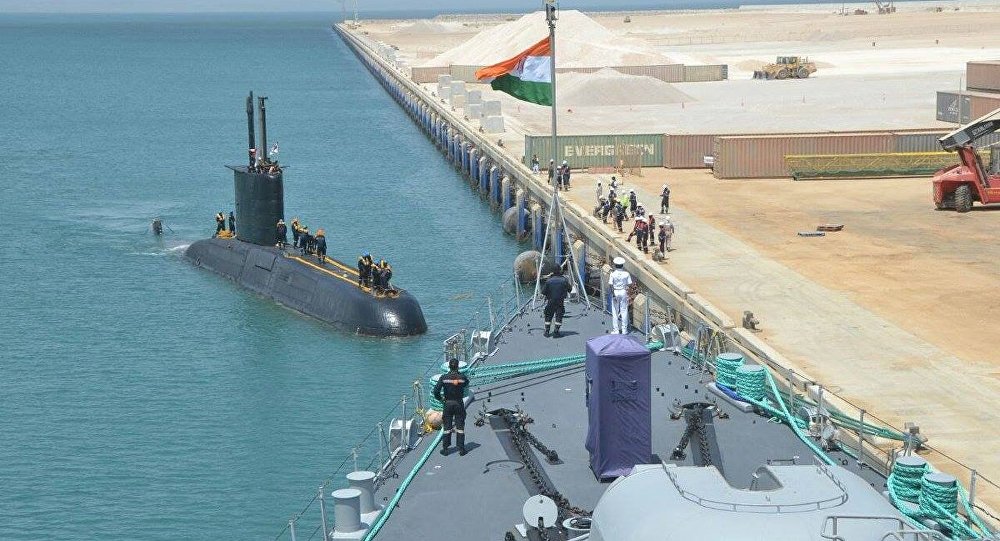 The Shishumar class attack submarine is being accompanied by two other naval vessels and two maritime patrol aircraft on a month-long mission to enhance cooperation with the countries of the Arabian Sea rim.

New Delhi (Sputnik) — India is deploying an attack submarine to the Western Arabian Sea in the Indian Ocean after a long gap. The Indian submarine Shishumar entered Duqm in Oman along with naval ship INS Mumbai and two P-8I long-range maritime reconnaissance aircraft on Wednesday. Meanwhile, naval ship INS Kochi is on its way to join the fleet.

"Indian Naval Ship Mumbai and submarine Shishumar entered Duqm, Oman as part of this deployment to the Western Arabian Sea, after conducting a series of exercises en-route. An Indian naval submarine is visiting a foreign port after a long gap," the Indian Navy said in a statement.

© AP Photo / Rafiq Maqbool
India’s First Scorpene Submarine to Join Naval Fleet from Next Month
The Naval units are on a month-long deployment with the aim of enhancing surveillance and cooperation with the nations of the Arabian Sea rim.

The deployment of the submarine by India in this section of the Indian Ocean comes in light of an increased presence of Chinese vessels in the region with Pakistan, Bangladesh and Myanmar poised to deploy additional Chinese acquired submarines. In last four months, Indian satellite and maritime P-81 patrol aircraft have tracked more than a dozen Chinese ships including submarines in its littorals.

However, experts say that such deployment of submarines by India in the region is not a new phenomenon and that it is happening after a long gap because of limited numbers.

"Submarines have been visiting foreign ports to both sides even in the Bay of Bengal and the Arabian Sea. We have sent ships & submarines earlier to the friendly ports and submarines have accompanied in past as a part of the normal exercise which we do in the Indian Ocean. I do not think this as extraordinary. Of course, there has been a gap for such deployment primarily because our numbers have been limited. I do not see much of strategic signaling through this," Cmde. Abhay K Singh (Retd), a research fellow at the Military Affairs Centre in the Institute for Defence Studies and Analyses, New Delhi told to Sputnik.

Nevertheless, Indian Navy has been making extra efforts to strengthen maritime relation with neighbor countries like Bangladesh and Myanmar. Admiral Tin Aung San, Commander-in-Chief, Myanmar Navy, is currently on a three-day visit to India to consolidate and enhance bilateral defense relations. During the recent visit of the Prime Minister Narendra Modi to Myanmar earlier this month three understandings with respect to maritime cooperation were signed between the countries.