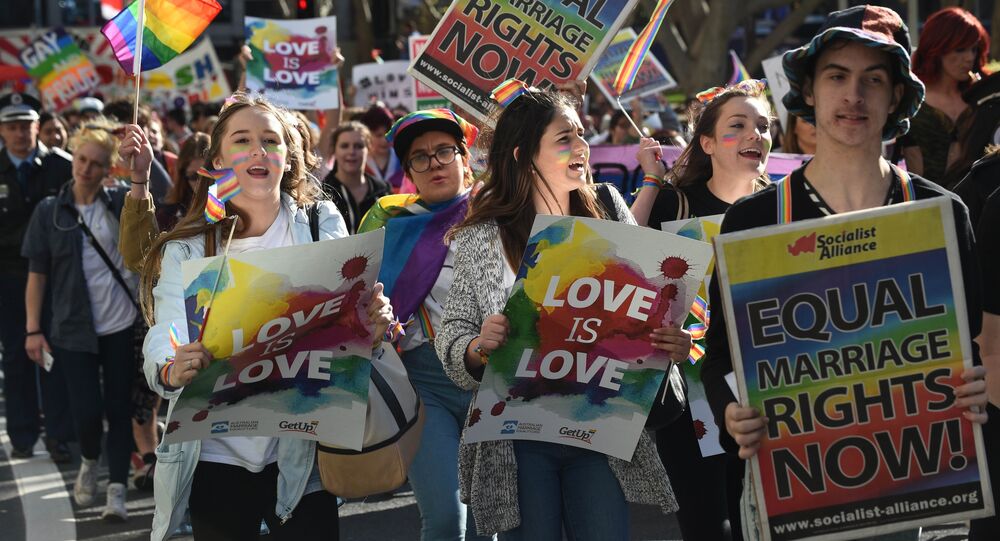 A young woman in Canberra, Australia has been fired after putting up a Facebook filter which said it was ok to oppose same-sex marriage. Her employer equated the woman's views as 'hate speech', but many Facebook users disagreed, arguing that firing her over her personal views was a form of discrimination in itself.

Late last month, 18-year-old Madeline, a Christian woman from Canberra working as a contractor for a local children's party business, put up a 'It's OK to vote No' filter on her Facebook page, thus publicizing her views about Australia's upcoming same-sex marriage referendum.

On Sunday, she found herself out of a job after receiving a Facebook message from her employer telling her she had been fired for her "homophobic views," which were "detrimental to the business."

Madlin Sims, owner of Capital Kids Parties, then published a post on her Facebook page where she explained her decision to fire Madeline, where she equated "advertising your desire to vote no for [Same-Sex Marriage]" with "hate speech."

"Voting no is homophobic," Sims insisted, adding that she didn't want "homophobes" working for her, "especially in an environment with children."

Speaking to Hack, an Australian current affairs radio program, Madeline said she was 'shocked' by the Sims' decision. Explaining her 'It's OK to vote No' filter, the young woman said that she saw others putting up 'Vote Yes' filters, and decided to put up an 'It's OK to vote No' filter on her page. "I'm not afraid to stand up for my beliefs and being a Christian," she said.

© AP Photo / Andrew Yates
Awkward Silence From Manchester United Star Lukaku as Penis Chant Dubbed 'Racist'
In a message to Madeline explaining her firing, Sims said that "homophobic views being made public are detrimental to the business and don't align with my personal values or morals as the owner of the business." "I respect you have your own morals, as does everybody and I'm sorry to let you go but we can't have you on any further," she added.

On Tuesday, Sims published a longer Facebook post, calling Madeline a homophobe and a racist, and saying she was concerned for the gay employees, gay parents, and gay children at the parties that her company organizes. "This. Woman. Was. A. Risk.," she emphasized, in a post she later took down.

© CC BY 2.0 / Giuseppe Milo / Enjoining the mosque
Make Way for the Ladies: Nordic Muslims Disagree on 'Feminist Islam'
Madeline said that she felt discriminated against, but that she wasn't planning on taking her employer to court. "I don’t feel like it would make me a bigger and better person if I did," she said.

A user named James wrote: "I'm all for same sex marriage but I'm so against this…You have pretty much publically shamed someone and bragged about firing someone online…As a professional business owner I'd probably keep stuff like this offline."

Scott, another supporter of same sex marriage, also believes Sims made the wrong decision. "It's not ok to fire someone for expressing an opinion in this country. It's not ok to vilify them…I understand where you are coming from but I don't want to live in a country where it is ok to dictate to other people what their opinions should be," he said.

"CONGRATULATIONS, on getting sued for unfair dismissal," another user quipped, adding that Sims' business will be likely to suffer over the post, and her actions.

© CC0
Born to Be Gay? Scientists Develop AI 'Gaydar' to Predict Sexual Orientation
"Your attitude is full of intolerance too!! Everyone has the right to their opinion," Margaret wrote.

"Get a load of this bully. You can't fire someone for voting the 'wrong' way," Scott suggested.

Other users were angered not just by the sacking itself, but the way Sims did it. "No amount of virtue signaling can redeem the lack of professionalism involved in firing someone via messenger, without giving the person a chance to explain themselves," Bianca said.

Still, some users defended Sims' move. "Thank you for being so brave about this, I can't imagine the amount of hate you'd be receiving at the moment. Sending you alllll my love," Rhianna wrote.

© AP Photo / Rick Rycroft
'The Killing Season': UK Leadership Instability Is a Road Already Well-Trodden by Australia
"Super proud of you Sims, its awesome to see people take a stand and call this hate out for what it is," Jadzia wrote.

Australia's Bureau of Statistics began mailing out the Australian Marriage Law postal survey last week. The survey, which asks Australians whether they support legalizing same-sex marriage, are to be completed and mailed in by next month. Survey results will be revealed November 15. A recent Guardian Essential poll showed that support for legalizing same sex marriage stands at 55%, with 34% opposed and the rest undecided.