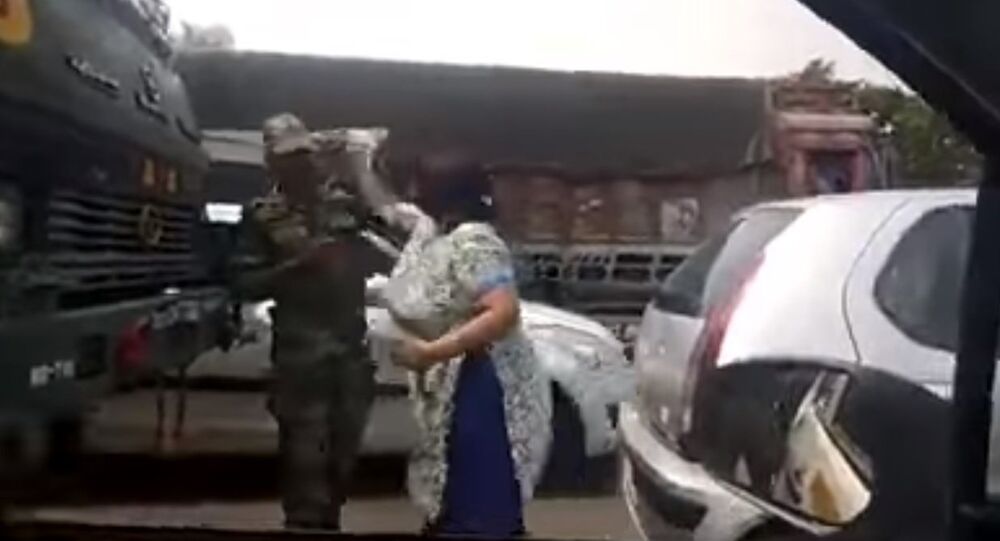 The matter caught the Delhi police’s attention after the video of the incident shot by a passerby went viral on social media with most Indians deploring the woman’s disrespectful behavior towards the soldier.

New Delhi (Sputnik) — Police in New Delhi have arrested the woman in the viral video wherein she is seen repeatedly slapping an officer of the Indian Army.

Prima facie, the incident that allegedly occurred on September 9 is being seen as a case of road rage. The viral video was inspected by the Delhi police and the victim was identified as Junior Commissioned Officer (JCO) Mahavir Singh of the Indian Army.

© AP Photo / Mustafa Quraishi
Did India Ignore US-Made M777's History of Failures?
​Upon enquiry, JCO Mahavir Singh confirmed that while he was on his way towards Delhi's Nizamuddin Railway station on September 9, a woman pulled her car over in front of their vehicle, forcing them to stop. She then stepped out of her car and asked Singh and his driver to alight their vehicle. She then repeatedly slapped both of them and drove off.

Explaining his ordeal, JCO Maharvir Singh claimed that the incident was totally unprovoked.

"Without any provocation from our side, the woman started hurling abuses and slapped me and my driver for 5-7 minutes. We were very angry but we did not utter a single word as we respect civilians, especially women," JCO Mahavir Singh said.

The woman's behavior has provoked angry responses from fellow Indians on social media.

A background check of the woman has revealed that the 44-year-old had recently separated from her husband as was living with her parents in Gurugram of neighboring state Haryana. She has been booked under various sections of the Indian Penal Code.

One Indian Soldier Killed in Firing By Pakistani Troops