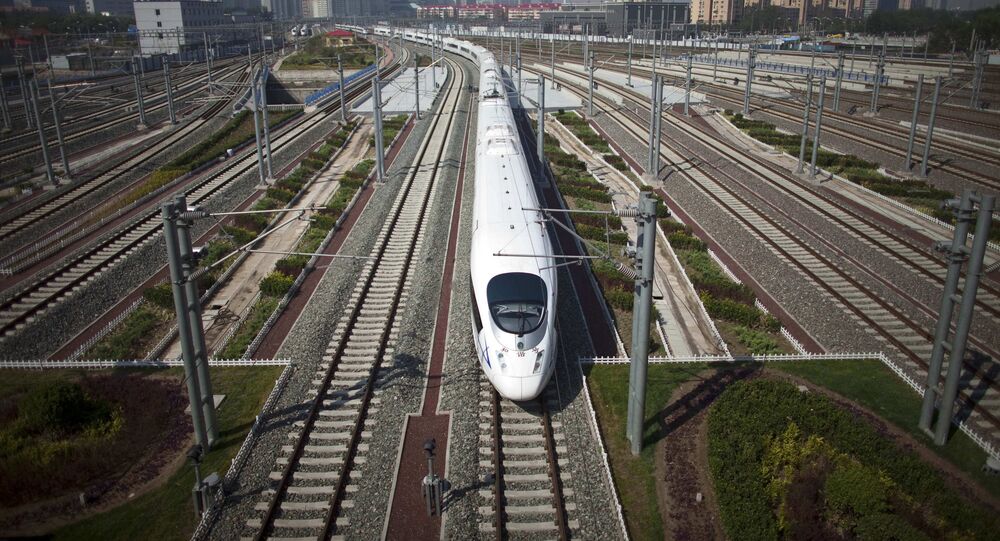 Experts are of the opinion that the competition between China and Japan, especially in the ASEAN region, has been fairly intense and in India, there will be more competition for other phases of the bullet train project.

New Delhi (Sputnik) — Even as the foundation stone for India's first bullet train was laid down by Japanese Prime Minister Shinzo Abe in Ahmedabad, China has reiterated its keenness in cooperating with India in the Railways sector for improving regional connectivity.

Commenting on India's first bullet train project, Chinese foreign ministry spokesperson said that the country was not disheartened by Japan bagging the project and that it remained committed to promoting cooperation in expanding India's rail network and improving its speed.

"China is pleased to see the infrastructure among the regional countries including the high-speed railway. We stand ready to promote cooperation with India and other regional countries for regional development. As to the railway cooperation, it is part of the practical cooperation between India and China. We have reached important consensus in this regard," the PTI quoted, Geng Shuang, spokesperson, China's Foreign Ministry during a media briefing in Beijing.

© Sputnik / Igor Ageyenko
BRICS Member States Express Interest in Eurasia High-Speed Railway
China is considered a world leader in railway infrastructure as it hosts the world's longest high-speed rail network that connects most of the Chinese cities, drastically reducing travel time within China in the last two decades. In recent years, the country has been aggressively lobbying to market its high-speed rail technology to other countries including India. Initial negotiations had led to China conducting a feasibility study for the proposed New Delhi-Chennai high-speed rail corridor; however, the initiative could not be converted into a deal.

Nevertheless, India and China have worked out a number of cooperative agreements that include training of Indian Railways' engineers in China in heavy hauling. China has bagged contracts to renovate some of the railway stations in India. The two countries are also jointly setting up a rail university.
Experts are of the view that India should rely on technology, investments and partnerships from everyone, including China.

"Our established foreign policy of non-alignment demands we do not fall into someone's strategic space and become their tool, but create it for ourselves to achieve what we want. Practically, that requires sourcing financing from not a small cabal of nations but from everyone. The only way we can get the best deals for our mega infrastructure and other projects is to allow everyone to compete. In short, India cannot just hand over financing to the US and Japan. We must also be open to China, Europe and the Middle East," Deep Kisor Datta-Ray, Associate Professor, at the O.P. Jindal University and author of The Making of Indian Diplomacy: a critique of Eurocentrism, told Sputnik.

From Japan's perspective, the Ahmedabad-Mumbai bullet train project is a major win over China, with whom it is locked in a strategic rivalry for commercial contracts in high-speed railway networks elsewhere in Asia.

In fact, Japanese companies are competing against the likes of Siemens AG, Bombardier Inc., Alstom and, lately, China's CRRC in a global market projected by BCC Research to be worth about $133 billion by 2019.