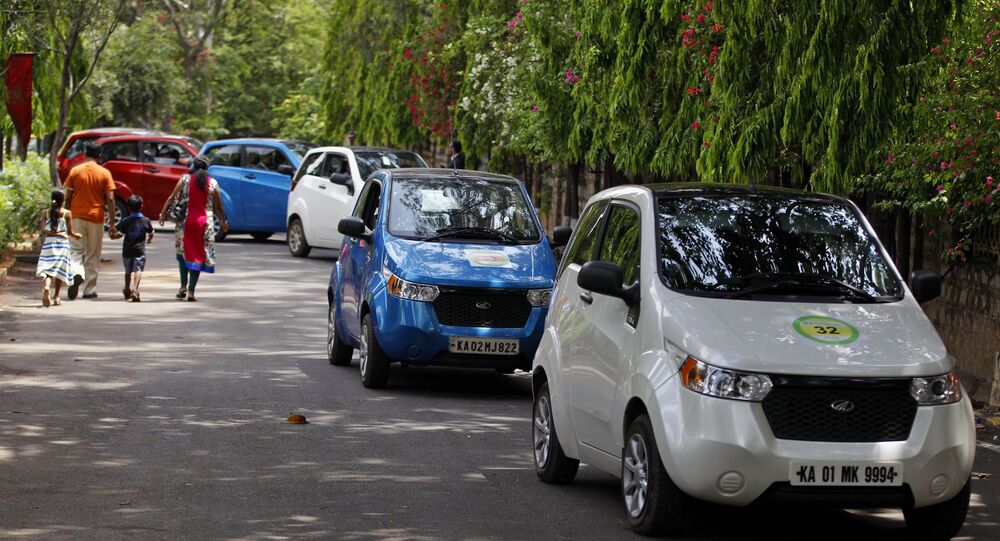 The Indian government says it is soon adopting a scheme to wipe out diesel and petrol-run vehicles in a phased manner by 2030 in order to cut carbon emissions and prevent choking of roads.

New Delhi (Sputnik) – India's Road Transport Minister Nitin Gadkari has said that the government is mulling a plan to incentivize electric vehicles in the country by discouraging the manufacturing and import of vehicles run on petrol and diesel.

"A Cabinet note is being prepared that will facilitate the use of electric vehicles. I am going to do it, whether you like it or not. I will bulldoze. Petrol diesel banaane walon kaa band-baajaa bajaanaa hai (We will take the makers of petrol/diesel engine vehicles to the task)," Gadkari told representatives during an industry event.

The Narendra Modi government aims to have only electric vehicles in India by 2030 and has advised the industry to do research and development on alternate modes of transport.

The minister noted that car usage has grown rapidly and even quipped that "my chef comes in a car." He emphasized that the car industry should increasingly focus on electric vehicles and added that cost of batteries has also been coming down.

© AP Photo / Bernat Armangue
Driverless Cars Can Wait, India Won't Let Drivers Lose Jobs
Responding to Gadkari's speech, outgoing president the Society for Indian Automobile Manufacturers (SIAM), Vinod Dasari said the industry fully backs the government's efforts to reduce imports and pollution. "Already, we are leapfrogging to BS6 from BS4 within three years, which is the shortest time anywhere in the world. However, what we are asking for is consistency in policy, which once formed must not be changed as the auto industry has long gestation period to introduce new technology," he said.

Indian experts say they welcome the government approach as it is being done in the larger common interest.

"Fossil fuel-based vehicle must be phased out in time bound manner and must be replaced by electric one. Diesel vehicles are the worst pollutant as compared to petrol ones. Electric vehicles are need of time as transportation sector contribute substantially to carbon emission triggering climate change along with health implication to urban commuter. Pro-electric regime is a must to bring carbon emission down. Developing countries must adopt it as in these countries vehicular emissions are rapidly increasing," Dr Kushagra Rajendra, Head of Department, School of Earth and Environment, Amity University told Sputnik.

According to a recent report by the World Health Organization, there were 4.24 million deaths globally in 2015 attributed to PM2.5-fine particulate matter with a diameter less than 2.5 micrometer-of which the share of India's 1.09 million deaths is 26%.