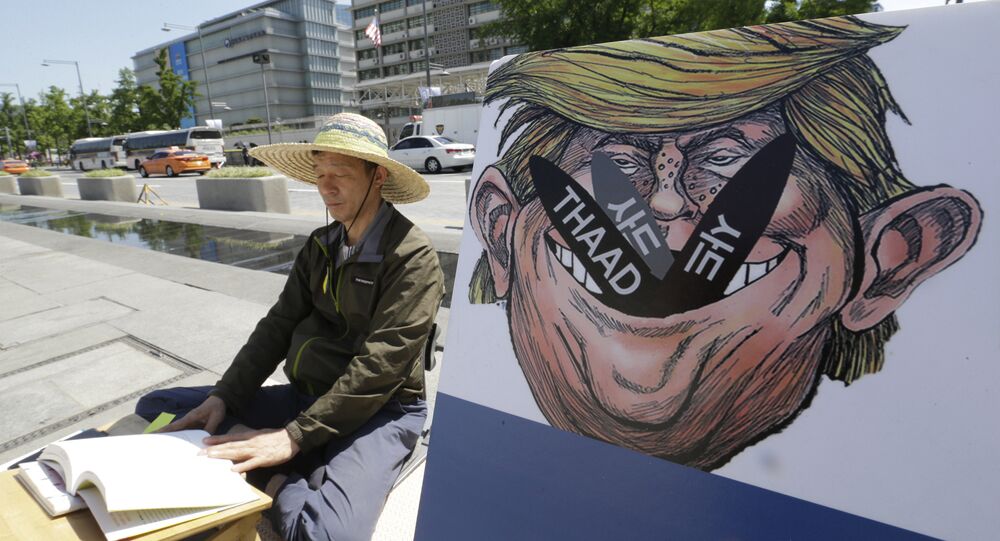 Washington's agreement to sell billions of dollars of arms to North Korea's neighbors, having ratcheted up a crisis in the Korean peninsula, is typical of US foreign policy, Serbian military analyst Miroslav Lazanski told Sputnik.

Following reports that North Korea has successfully tested a hydrogen bomb, US President Donald Trump announced on Tuesday that he had agreed to sell a large amount of arms to Japan and South Korea. Trump has repeatedly threatened North Korea with military action and Pyongyang has stepped up its tests of nuclear and ballistic missiles since his inauguration.

​US joint military exercises with South Korea and threats from Washington that "all options are on the table" for dealing with North Korea have inflamed the situation in the Korean peninsula. While Russia and China have called for both sides of the conflict to commit to a process for de-escalation, the US is intent on supplying more weapons to an already tense region.

"You go in somewhere and lose billions of dollars and [60,000] soldiers like in Vietnam, or even Afghanistan, and you don't make anything. But then you go into Iraq and it becomes a private oil pump of the Bush family," Lazanski said.

© Sputnik / Iliya Pitalev
North Korean Leader Orders Scientists to Strengthen Nuclear Forces
"They withdrew the Libyan state assets which weren't frozen, some $250 billion from various banks. Not just the Americans, but the French and the British also financed the war in Libya using Libyan assets."

Recently released memos from the UK's National Archives are a reminder of the role of the military-industrial complex in the run-up to recent conflicts. The de-classified documents show that in the build-up to the Gulf War, the UK government saw the US operation, codenamed Operation Desert Shield, as an "unparalleled opportunity" for UK arms exporters to profit, and sent then-Defense Minister Alan Clark on a tour of the Gulf in an attempt to clinch deals.

There is currently a diplomatic crisis in the Gulf, where Saudi Arabia and its allies have ostracized neighboring Qatar for allegedly supporting terrorism. The announcement in early May came just after President Trump's visit to Riyadh, during which the US President signed a huge $110 billion arms deal with Saudi Arabia.

According to a US Defense Security Cooperation Agency fact sheet, the deal includes a memorandum of intent with Saudi Arabia that could include the sale of THAAD missile systems, and the State Department has also approved the potential foreign military sale of Lockheed's Multi-Mission Surface Combatant ship.

Youtube / Aram Pan
The One-of-a-Kind Flight Over Pyongyang Shatters Myths About North Korea
As the Qatar crisis erupted, Turkish political analyst Ibrahim Varli told Sputnik that the US has used the same strategy in the Middle East, the Korean peninsula and the South China Sea, to destabilize a region and then benefit militarily and economically.

"First, the US artificially instigates tensions between regional players and then derives a direct economic benefit from the situation."

"This strategy was used [by Washington] in the South China Sea, and now we see it in the Middle East region, in Qatar," Varli said.