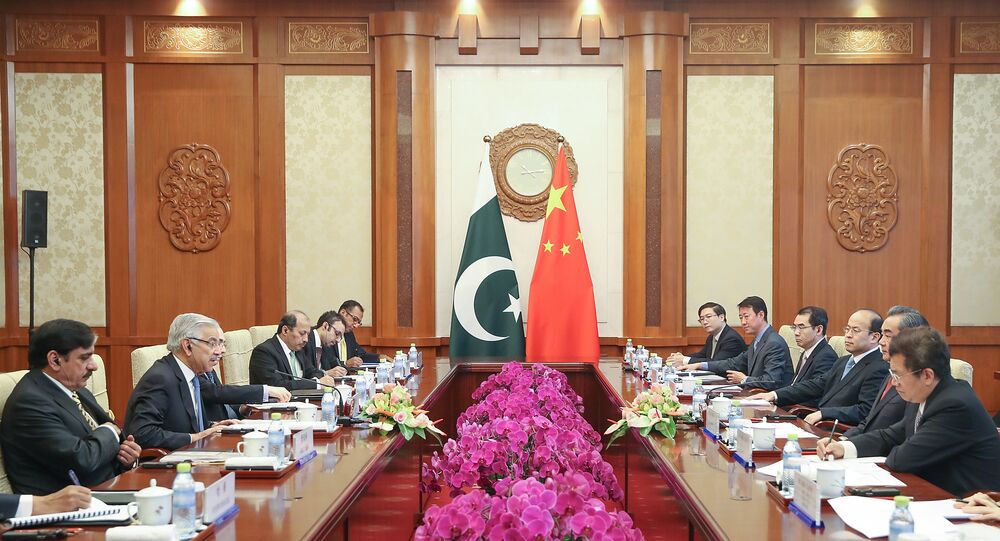 After Washington's decision to suspend its 225-million-dollar military aid to Pakistan, Islamabad may turn to China in a bid to resolve the issue, Natalaya Zamarayeva of the Institute of Oriental Studies of the Russian Academy of Sciences told Sputnik.

Commenting on the US State Department's decision to suspend military aid to Pakistan, a Russian expert told Sputnik in an interview that she didn't rule out the possibility that Pakistan would turn to China in a bid to resolve the issue.

"No doubt, Pakistan will try to develop its military and technical cooperation with China, an issue that will certainly top the agenda of the Beijing talks. As for whether China will be able to replace the US in terms of giving military aid to Pakistan, it is a question [which can be answered] in the future," Natalya Zamarayeva said.

© AFP 2021 / AMIR QURESHI
Cause of Friction: Why Pakistan Has Chosen China Over the US
She referred to Pakistani Foreign Minister Khawaja Asif's current visit to China which she said comes after US President Donald Trump accused Islamabad of supporting terrorists.

She pointed to the ongoing power struggle in Pakistan, saying that the transition period is likely to last until the parliamentary elections in the country, which are slated for in 2018.

According to her, Islamabad has already begun to adjust its domestic and foreign policy amid the increasing clout of the Pakistani military. She said that Islamabad is specifically focusing on issues related to its cooperation with China, India and Afghanistan.

Zamarayeva was echoed by Chinese political analyst Zhang Li, who wasn't enthusiastic about Beijing quickly deciding to offer Islamabad a helping hand in terms of a military aid.

"Despite a variety of contacts between China and Pakistan, I don't think that the US decision to suspend military aid to Pakistan can prompt China to cooperate with Islamabad on the matter," Li said.

He recalled that "Chinese-Pakistani cooperation and the anti-terrorist interaction between Washington and Islamabad are by no means connected."

On July 21, media reports said that the US State Department decided to withhold 225 million dollars of its military aid from Pakistan.

On August 21, during a speech at Fort Myer in Arlington, Virginia, US President Donald Trump announced Washington's readiness to change its approach to relations with Islamabad if the Pakistani side continues to support terrorists.

© AFP 2021 / AAMIR QURESHI
'Safe Haven for Terror': Trump's Verbal Abuse Driving China, Pakistan Together
"The next pillar of our new strategy is to change the approach in how to deal with Pakistan. We can no longer be silent about Pakistan’s safe havens for terrorist organizations," Trump said.

Such a direct accusation of sponsoring terrorism provoked a response from Islamabad; the Pakistani Foreign Ministry said that the criticism from President Trump is disappointing and that the planned visit by a representative of the State Department to Islamabad had been cancelled.