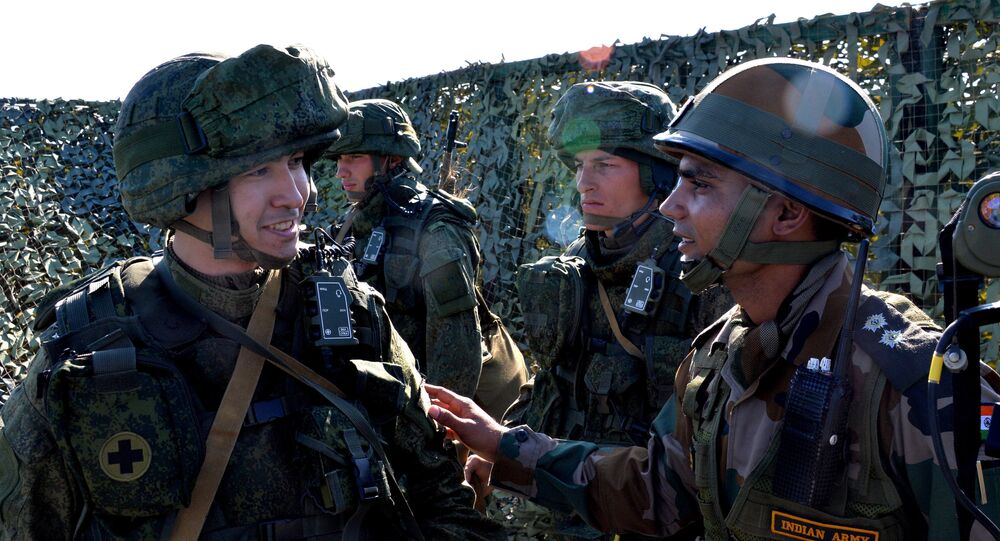 India’s joint military exercises with the world’s superpowers are not reminiscent of muscle-flexing in the region but preparedness for unforeseen contingency globally, says expert.

New Delhi (Sputnik) – India and the United States are currently preparing for a joint military training named Yudh Abhyas — 2017 to be held at the Joint Base Lewis McChord, Washington from 14 to 27 September. This will be the 13th edition of the joint exercise hosted alternately between the two countries since 2004. Indian Army has termed the exercise a part of a joint preparation to meet any unforeseen contingency across the globe.

“Exercise Yudh Abhyas is one of the largest joint running military training and defense corporation endeavors between India and USA. Multiple scenarios will be rehearsed during the joint exercise with a view to understand each other's organizational structure and battle procedures which would result in a higher degree of joint manship that would further facilitate interoperability between the armed forces of both countries to meet any unforeseen contingency across the globe,” Indian Army said in a statement.

Exercise Yudh Abhyas is an integration level training which is considered an ideal platform to learn from each other's experiences of planning and execution of operations. Both armies will jointly train, plan and execute a series of well-developed operations for neutralization of threats of varied nature. This exercise comes close on the heels of a month-long tri-lateral Malabar naval exercise wherein India, US and Japan took part in a complex and the biggest of its kind joint exercise the Indian Ocean.

Following Yudha Abhyas with America, more than 350 Indian soldiers and several warships including a multi-role stealth frigate, an anti-submarine warfare corvette will take part in the "Indra" combat exercise in Russia from October 19 to 29. This would be the first ever tri-service joint exercise India would be conducting with another country.

© Sputnik / Ildus Gilyazutdinov
Russia, India to Train Naval, Air Blockade During Joint Exercises Indra-2017
There have been a lot of speculations that India’s intent behind strengthening military cooperation with countries like the US and Japan was mainly a manifestation of its regional geopolitical ambitions.  However, an Indian expert foresees no immediate change in India’s military policy of non-interference.

“I do not think there is any change in India’s policy of not getting involved in internal affairs of other countries or to launch operation outside regional mandate. But it might happen that Indian forces and American forces are both operating under UN flag then this kind of joint exercise comes to play a major role,” Brigadier Rumel Dahiya, Delhi based Military analyst told Sputnik.