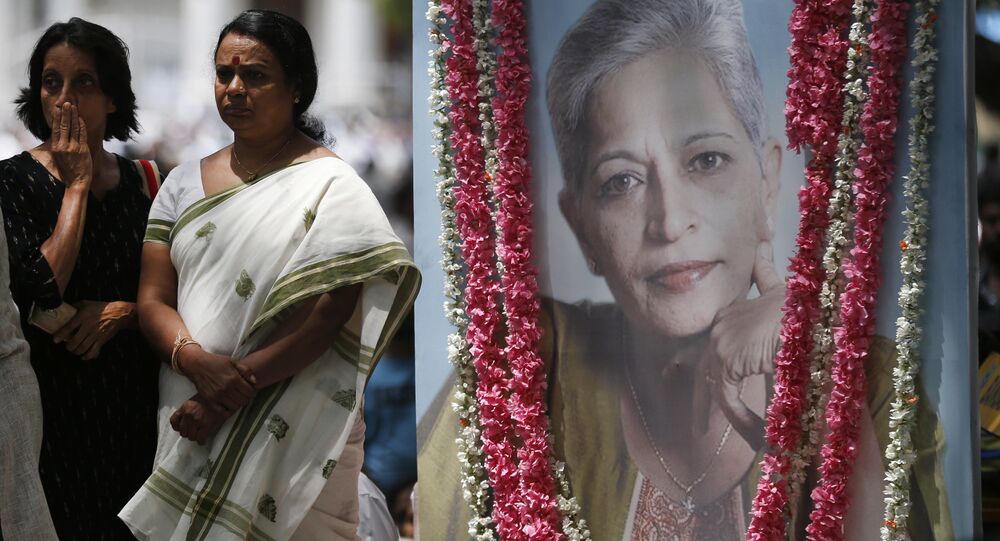 The assassination of an Indian journalist who had been critical of Hindu nationalists has highlighted the growing gap between secular and religious Indians.

A prominent journalist critical of Hindu nationalists has been shot dead in India's "Silicon Valley" city of Bangalore.

​Gauri Lankesh, 55, was shot dead on the doorstep of her home in the city on Tuesday, September 5, and the finger of blame is being pointed at extreme Hindu nationalists, who she had often criticized in print.

The Indian Prime Minister, Narendra Modi, has also been criticized for failing to condemn her murder and for being too close to the extremists.

Till now Modi has not said a word on Gauri's murder and those he follows are going berserk justifying this brutal murder.

​One newspaper pointed out that Mr. Modi followed a number of Twitter accounts which poured out bile in the wake of Ms. Lankesh's death.

The assassination highlights the growing gap between Hindu nationalists and those who want to preserve the secular state that India was when it was founded 70 years ago.

Ms. Lankesh was buried with full honors, and the chief minister of Karnataka state, Siddaramaiah, attended her funeral on Wednesday, September 6.

There were protests against her killing in Delhi and several other cities.​

I strongly condemn & deplore the messages on social media expressing happiness on the dastardly murder of #Gaurilankesh.

​Ms. Lankesh herself had often written of her fears that Hindu nationalists would tear India apart.

"I don't care what happens to me, they even called me a s**t. But I really worry for the country. These guys will break it up," she told a friend after rationalist scholar Malleshappa Kalburgi was gunned down by extremists in 2015.

Attack on Freedom of Expression

Ms. Lankesh's brother Indrajit and sister Kavita told a press conference her killing was an attack on freedom of expression in India.

"She was never scared. Even after her meeting with the chief minister recently, she had countered our question over protection and argued against seeking security," said Kavita.

"Gauri was a lot like my father, she was aggressive in her writing and warm and soft in person. She used to meet even those people who disagreed with her ideologically," said her brother.

"We are all with you together and we shall reclaim our secular India," she wrote.

Mr. Modi and the BJP have been in power in India since 2014 and, as the economy powers forward, look set to win the next election in 2019 against the secular Congress Party, which has been struggling in recent years.