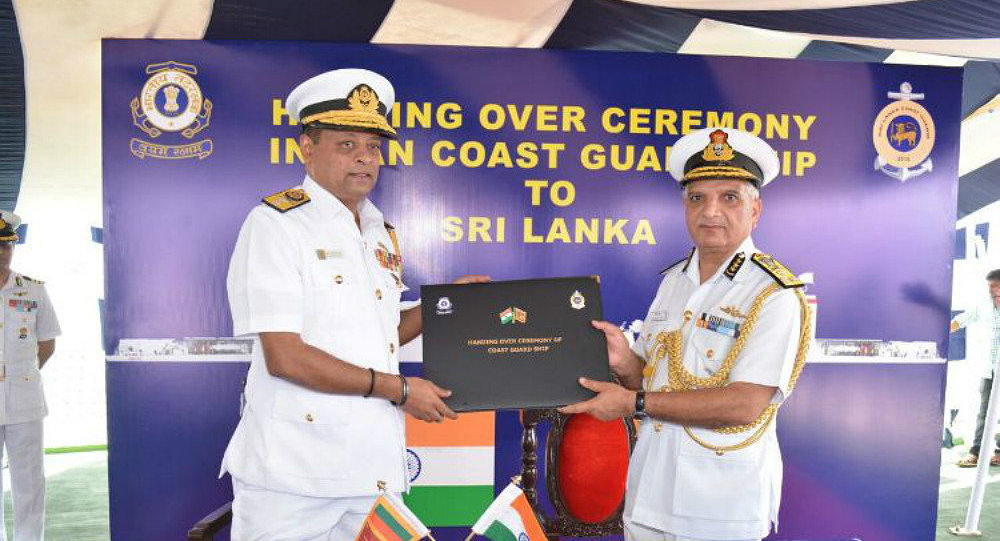 The offshore patrol vessel ‘Varuna' will provide crucial support to the Island nation which is strategically important for India in its efforts to counter the perceived Chinese threat in the Indian Ocean Region (IOR).

New Delhi (Sputnik) — Furthering its efforts to arm countries of the Indian Ocean Region, India has handed over its off-shore patrol vessel, Varuna, to Sri Lanka. This is second biggest ship India has delivered to Sri Lankan coast guard in the last two months.

"The handing over of the Indian Coast Guard's offshore patrol vessel to Government of Sri Lanka for training and surveillance purposes is a part of India's continuing efforts for cementing the historical and cultural ties between the two countries," Indian Coast Guard said in a statement.

Varuna was decommissioned from the Indian Coast Guard on August 23 this year. Officers and sailors of Srilankan Coast Guard will undergo a short training on operating Varuna before the vessel takes off to Sri Lanka.

© AP Photo / Anupam Nath
India to Purchase Modern Observation Systems to Monitor Chinese Activities
India had also handed over two OPVs of the Indian Coast Guard — Varaha in April 2006 and Vigraha in August 2008.  Apart from the used OPVs, the Indian government had also sanctioned two new OPVs for Sri Lanka in 2010 and the contract for the same was signed in April 2013. The first OPV was delivered to Sri Lanka in July this year. The vessel is considered Sri Lankan Navy's biggest ship. The 105.7-meter-long and 13.6-meter-wide vessels have a full-load displacement capacity of 2350 ton, with an overall beam of 13.6 meters, and a hull draught of 3.6 meters. The OPV can reach a top speed of 24 knots and accommodate a crew of 118, including 18 officers, and a helicopter on its flight deck.

Strengthening the naval capacity of neighboring friendly countries have been high in India's maritime agenda as it seeks to contain China's presence in the IOR.