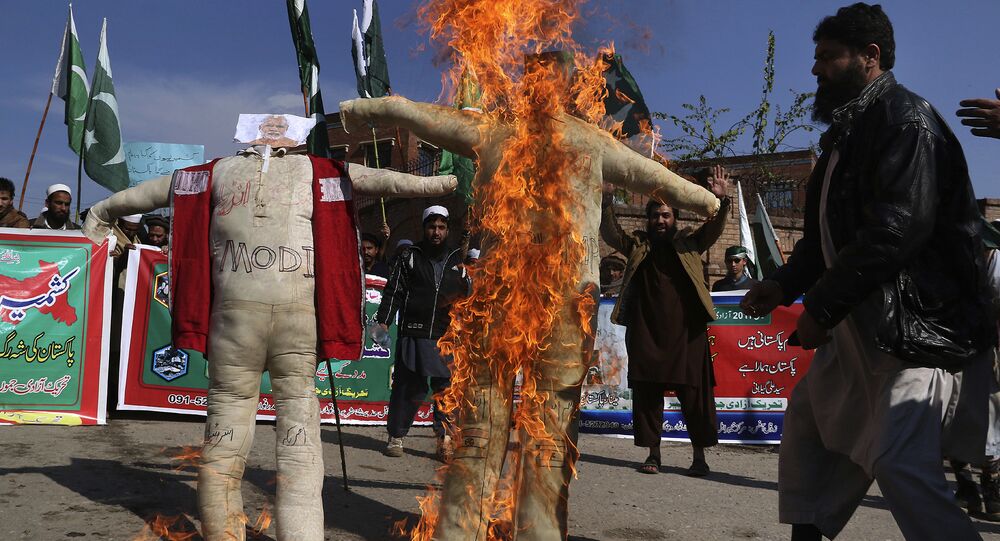 Pakistanis in a major rally in Quetta have responded forcefully to US President Donald Trump’s suggestion that their government has harbored jihadist elements within its borders.

"Today, with the grace of God, thousands of people have come out into the streets," a protester in Pakistan’s Balochistan province declared, to demonstrate Pakistan’s denial of US President Donald Trump’s accusation that the country provides safe haven for terrorists.

"The purpose of today’s ‘Down with America’ rally is to reject the rhetoric of the United States about Pakistan," one of the speakers at the rally told Agence France-Presse.

During last week’s highly anticipated speech by Trump regarding the president’s strategy in South Asia, the US leader promulgated that, "Today, 20 US-designated foreign terrorist organizations are active in Afghanistan and Pakistan — the highest concentration in any region anywhere in the world."

"Pakistan often gives safe haven to agents of chaos, violence, and terror," Trump said. "The threat is worse because Pakistan and India are two nuclear-armed states whose tense relations threaten to spiral into conflict."

Pakistanis saw the situation differently. “The US, along with 42 members of NATO, are holding Pakistan responsible for what has been happening in Afghanistan for the past 16 years,” a speaker at the Quetta rally told AFP. “Today’s rally rejects the policy of the United States. The US foreign and defense policies have failed.”

Trump said in his speech the US will “change the approach” on “how to deal with Pakistan.” It’s not entirely clear how relations will play out under the new approach.

Since Trump’s remarks, a few significant events have occurred in the bilateral bond. First, the Pakistani Foreign Ministry released a statement August 22 noting “no country in the world has done more than Pakistan to counter the menace of terrorism” and that “instead of relying on the false narrative of safe havens, the US needs to work with Pakistan to eradicate terrorism.”

On Friday, a spokesman for the Foreign Ministry said “there can be difference of opinion between two countries, for which there are established channels of communication through which misperceptions can be allayed and differences resolved.”

On Sunday, a scheduled meeting between acting Assistant Secretary of State Alice Wells and Pakistani officials in Islamabad was postponed “at the request of the Government of Pakistan,” a US embassy official in Islamabad told Reuters over the weekend.

The Diplomat’s Ankit Panda suggested Monday “the postponement of Wells’ visit could indicate that the Trump administration’s accusations against Pakistan last week could herald a difficult period in ties between Washington and Islamabad.”

Getting Away With Murder & Torture: Trump Pardons Sheriff Arpaio

Trump: 'I Think We Will Eventually Get Along With' Russia