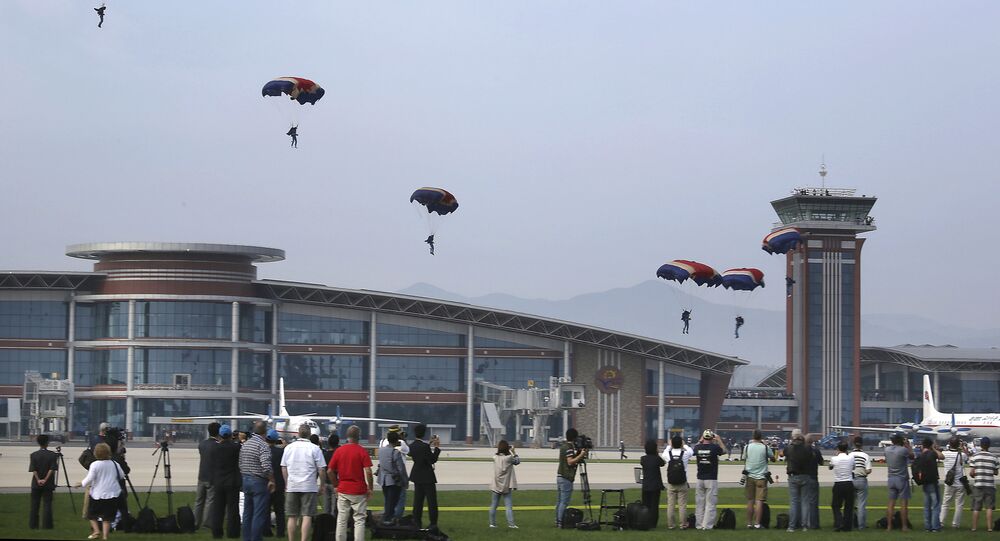 MOSCOW (Sputnik) — The reason is the diminished interest of Western tourists who were the primary visitors of the inaugural air show held in the previous year, in the wake of the tragic death of a US national previously imprisoned by the isolated nation, a spokeswoman of a Chinese travel agency told Sputnik Monday.

US college student Otto Warmbier came to North Korea in 2016 and was sentenced to 15 years of hard labor for trying to steal a propaganda sign from a hotel in Pyongyang.

"We have confirmed with the North Korean organizers that the 2017 Wonsan Air Show has been canceled, because westerners showed little interest following the death of a US tourist earlier this year," a spokeswoman for Beijing-based Zhixing Heyi Travel, who would only gave her surname Cui, told Sputnik.

© REUTERS / KCNA
US Pressure on North Korea 'Leads Pyongyang to Militarize Further'
North Korea held the first Wonsan International Friendship Air Festival in September last year. Zhixing Heyi Travel is listed as one of the designated tour operators by the organizers of the Wonsan Air Show.

The US State Department introduced a travel ban on North Korea in June, prohibiting US citizens from traveling to the Asian country, amid increasing tension on the Korean Peninsula.

Netherlands-based 4Aviation, a designated tour operator of the Wonsan Air Show, also confirmed with Sputnik about the cancellation.

"We have indeed been informed that the Wonsan Air Festival has been canceled," 4Aviation responded through a message on Facebook.

"One person from France and two from Netherlands were the only ones interested in the Wonsan Air Show this year," Vega said.

He added that his company probably would not send a tour group to Wonsan Air Show, even if it went on as scheduled.