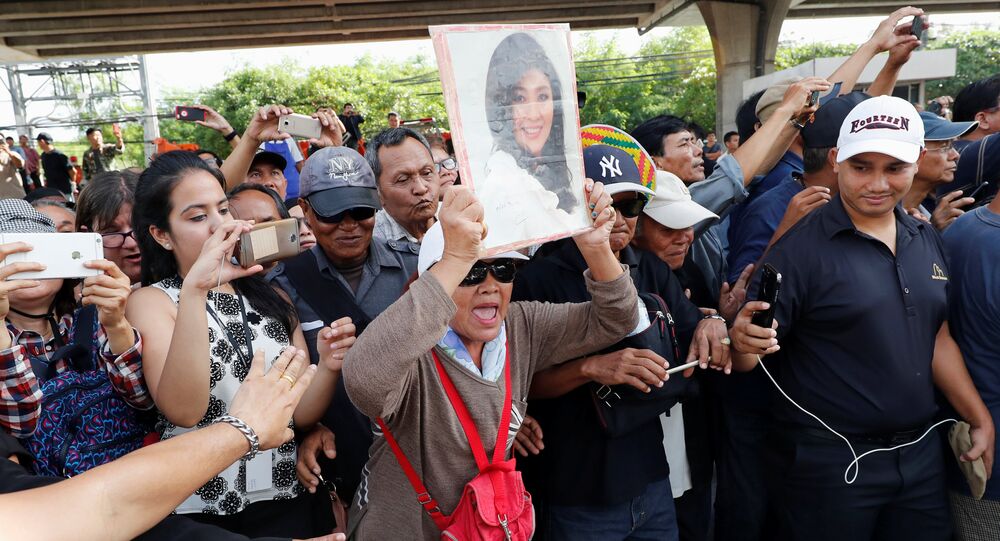 The majority of former Thai Prime Minister Yingluck Shinawatra’s supporters will forgive her alleged fleeing from the country to avoid imprisonment, Nattawut Saikua, the leader of the opposition United Front for Democracy Against Dictatorship (Red Shirts) movement, said in an interview with Voice TV broadcaster on Saturday.

BANGKOK (Sputnik) – On Saturday, several ex-parliamentarians from the Pheu Thai Party, formerly led by Shinawtra, said that her failure to show up at a trial, which was characterized by the court as fleeing from justice, would negatively affect the party’s image before the upcoming parliamentary elections scheduled for the second half of 2018.

"I do not think so. The majority of Yingluck Shinawatra’s supporters will forgive her fleeing abroad. Who wants to spend 10 years in jail? And who needs such a sacrifice? When a politician, who had made such a sacrifice, is jailed for such a long term, he of course is very much respected by the public. But he cannot do anything useful for the people while in prison," Saikua said.

© REUTERS / Chaiwat Subprasom
Thai Ex-Prime Minister Shinawatra's Location Unknown After Courtroom Absence
Activists of the students’ pro-democratic movement, who were repeatedly detained by Thai military authorities since the coup of 2014, have also expressed support for Shinawatra.

Shinawatra called off her appearance minutes before the trial earlier on Friday, saying that she was ill. Thai Deputy Prime Minister Prawit Wongsuwon said later on the same day that the ex-prime minister might have fled the country. Media suggested earlier on Saturday that Shinawatra fled to Dubai, where her brother Thaksin Shinawatra resides.

The Thai court has reportedly issued a warrant for Shanawatra’s arrest, which may be voided if Shinawatra presents a medical certificate confirming her condition.