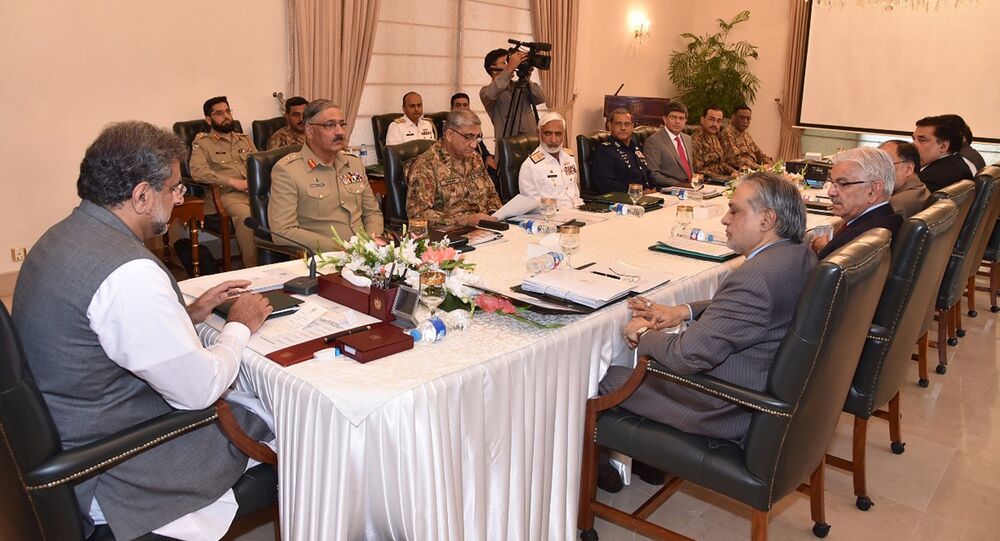 The Pakistani National Security Committee rejected the accusations brought against Islamabad in US President Donald Trump Administration’s South Asia strategy, part of which stipulates putting more pressure on the country to stop harboring terrorists, the Pakistani Foreign Ministry spokesperson said in a statement on Thursday.

MOSCOW (Sputnik) – On Monday night, Trump unveiled his new strategy for Afghanistan during a speech in which he called on Pakistan to do more to crack down on terrorist safe havens. On Wednesday, Politico news website reported, citing senior US administration officials, that the United States may impose sanctions on Pakistani officials with links to terrorist organizations.

"The National Security Committee in its meeting on 24 August 2017 discussed the Trump Administration’s South Asia Strategy. The Committee outrightly rejected the specific allegations and insinuations made against Pakistan. It was observed that to scapegoat Pakistan will not help in stabilizing Afghanistan. In fact, being its immediate neighbor, Pakistan has an abiding interest in peace and stability in Afghanistan," the statement said.

© CC0
US Crackdown on Pakistan May Jeopardize Afghan Supply Routes
While noting Washington's commitment to "continue to shoulder the burden of Afghanistan and reverse the expanding ungoverned spaces in the country," the committee observed that "Pakistan has consistently supported all international efforts for a stable and peaceful Afghanistan and has also committed more than a billion US dollars for infrastructure and social development in that country," the statement read.

According to the Foreign Office spokesperson, Pakistan has over the years worked with both the United States and Afghanistan to promote peace through political negations endorsing and supporting Afghan-owned and Afghan-led initiatives for peace.

The committee also called for effective and immediate US military efforts to eliminate sanctuaries harboring terrorists responsible for fomenting terror in Pakistan on Afghan soil.

"The Afghan war cannot be fought in Pakistan," the committee said, pointing toward security improvements inside Pakistan and sacrifices made by the country in its effort to combat terrorism.

"We consider the lives of the citizens of other countries as sacrosanct as those of our own and, therefore, Pakistan is committed to not allowing its soil to be used for violence against any other country," the statement said.

In conclusion, the committee reaffirmed that "Pakistan will continue to extend all possible cooperation to the international community for achieving the common objectives of peace and stability in Afghanistan and in the broader region."

Afghanistan has been ravaged by the conflict with the Taliban, a major Islamic fundamentalist political movement in the 1990s, which held power over a large part of the country in 1996-2001 before being overthrown. The movement was then able to regroup and regain some of its prominence, waging war against the Afghan government.