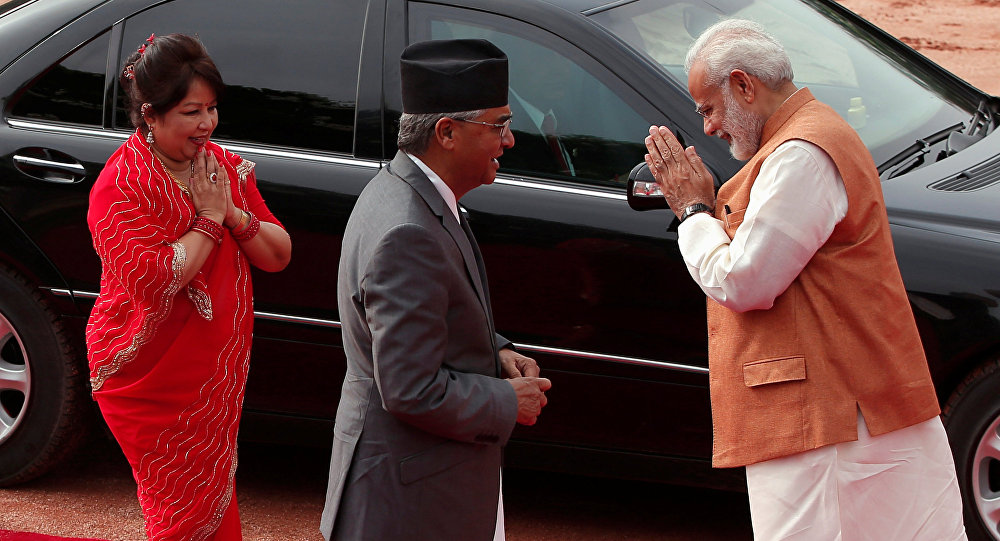 Though it was reported that the two leaders only exchanged views on certain issues and official parleys would start on Thursday, the strategic undertone of Wednesday’s unscheduled meeting could not be missed.

Earlier, India's Foreign Minister Sushma Swaraj received the Nepalese Prime Minister at the international airport. This is Deuba's first foreign visit after assuming his current office in June this year.

A special welcome for a close neighbour! EAM @SushmaSwaraj receives @PM_Nepal Sher Bahadur Deuba on his arrival on a State Visit to India pic.twitter.com/fVb4JPFOCE

​The visit is of high importance in view of the standoff between Indian and Chinese troops in Doklam. Although Nepal has maintained strict neutrality in the standoff between its northern and southern neighbor, both the countries are vying for support as evident from the strategic undertone of Indian and Chinese foreign ministers' recent visit to Kathmandu within days of each other.

© CC0
China Offers Aid to Nepal, Unsettling India’s Attempt to Woo Back Old Ally
While it is being speculated that water-management will dominate the talks as both countries are currently reeling under floods, India is expected to make some big ticket announcements. The two countries will ink four memorandums of understanding paving way for Nepal to utilize the $250 million Indian assistance, pledged earlier, for reconstruction of housing, education, health and cultural heritage destroyed in the 2015 earthquake. Another $750 million will be given through lines of credit.

Last year, India had issued guidelines allowing the import of hydroelectricity generated from only those projects that have at least 51% share of the Indian government or companies. This move was seen by Nepal as a tactic to discourage it from inviting Chinese investments in its hydropower projects. It alleged that it was a violation of the 2013 power-trade agreement with India. In this backdrop, Nepal and India are expected to negotiate cooperation in two major hydropower projects — Karnali and Arun.

Meanwhile, on Wednesday the Indian government gave its nod for a new bridge on the India-Nepal border over Mechi River which is expected to not only improve connectivity but also improve bilateral trade.

India's relation with Nepal had hit an all time low after it imposed an unannounced blockade at the border with Nepal in 2015, displaying apprehension over certain provisions in Nepal's new constitution. This had dealt a crippling blow to political as well as economic relations between the two states, which were just limping back to normalcy following the earthquake that devastated almost half of Nepal.

© AP Photo / Gurinder Osan
India Tries to Reinforce Ties With Nepal While Watching Its Standoff With China
In the aftermath, China made a steady inroad into Nepal in the form of massive investments in infrastructure, relegating India to the second position in the list of assistance providers. With this, China also managed to rope in Nepal as a partner in its Belt and Road Initiative (BRI) making India extremely uneasy.

Meanwhile, the Chinese government has brushed aside reports that it was concerned over Deuba's visit to India. "I would like to point out that the international relations in the 21st century are not zero-sum games and do not mean that one country needs to counterbalance another. Both Nepal and India are important neighboring countries of China. We welcome the sound development of the Nepal-India relations and hope that India can put the growth of the China-Nepal relations into perspective," China's Foreign Ministry Spokesperson Hua Chunying's said at a regular press conference on Wednesday.