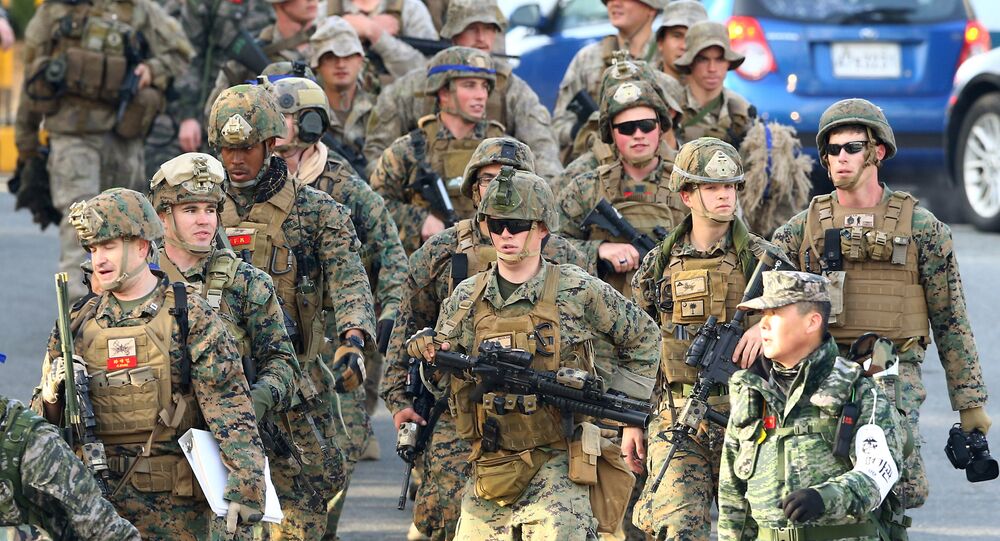 For the first time ever, the US and South Korea will be conducting war games meant to prepare their militaries for the possibility of a nuclear war, according to a South Korean Defense Ministry official. North Korea has previously called the planned military exercises a provocation that could lead to nuclear war.

No other details were given by the Defense Ministry spokesperson, who was speaking to South Korean newspaper Chosun Ilbo. However, the war game does come in the wake of North Korea's first-ever test of a long range intercontinental ballistic missile in July, as well as reports that the country might be capable of fitting a nuclear payload onto it.

Ulchi Freedom Guardian, a 10-day military exercise that this summer involves 17,500 American and 50,000 South Korean soldiers (as well as contingents from seven other US allies), has been an annual event for 41 straight years. The focus of the exercises is to defend South Korea from a mock invasion from the North.

Michelle Thomas, a US military spokeswoman, said of the exercises: "It's to prepare if something big were to occur and we needed to protect [South Korea]."

North Korea traditionally condemns the drills as provocative, and this year is no different. State news agency KCNA called Ulchi Freedom Guardian an exercise "aimed to ignite a nuclear war on the Korean Peninsula at any cost."

South Korean President Moon Jae-in said that the exercises were not meant "at all to heighten military tension on the Korean Peninsula as these drills are held annually and are of a defensive nature. North Korea should not exaggerate our efforts to keep peace nor should they engage in provocations that would worsen the situation, using [the exercise] as an excuse."

China chimed in to the contrary, with Foreign Ministry spokeswoman Hua Chunying criticizing the drills during a regular press conference. Hua called them "not helpful to the de-escalation of the current tensions and the efforts made by all relevant parties to promote peace talks." She added that the situation on the peninsula was "highly complex, sensitive and delicate" and that South Korea and the US shouldn't "add fuel to the fire."

Despite tensions with North Korea at their highest in decades, US Forces Korea has downsized American participation in the exercise from 2016: 17,500 American soldiers are participating in the 2017 exercises, down from 25,000 the previous year.

Hua urged both sides to focus on more "constructive actions" instead, such as accepting China's proposal of "suspension for suspension." The solution, proposed by Beijing in March, calls for North Korea to stop all missile tests in exchange for the US and South Korea stopping all military exercises.

Pyongyang welcomed the plan, while Washington and Seoul rejected it. American military experts called the deal overwhelmingly advantageous for North Korea, as they get to continue their own military exercises and thus better prepare for offensive or defensive warfare.

"It is hard to imagine why the United States would accept [suspension for suspension], because of the vulnerability it would create," said Bruce Bennett, a senior defense researcher at Rand Corp., to the Charlotte Observer.

Hua also added that the "tense situation on the Korean Peninsula has shown a slight sign of abatement recently." This may have been a reference to General Joe Dunford, the United States' highest ranking military officer and the chairman of the Joint Chiefs of Staff, visiting China earlier in August to meet with President Xi Jinping.

During his visit, the US and China agreed to strengthen military ties and the lines of communication to help find a resolution to the North Korean crisis.