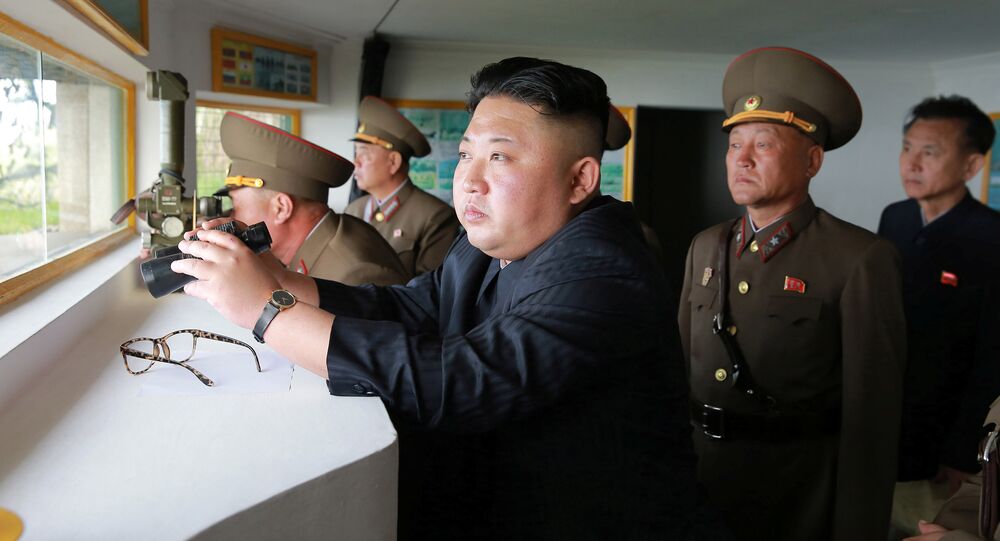 Reports surfaced Tuesday indicating that North Korean leader Kim Jong-un made a secret visit to a military unit near the inter-Korean border earlier this month, prompting South Korea to shore up its defenses against a possible provocation.

According to military officials, the North’s border unit is surrounded by streams and mountains, and while it isn’t clear what Kim did while visiting the unit, some believe that was checking their readiness and may have given them a mission, sources told the Korea Times.

Kim had been out of the public eye from late July to mid-August.

The state-run Korean Central News Agency (KCNA) reports that army generals briefed Kim on a planned and apparently readied missile attack on Guam, a US territory, during the inspection. According to KCNA, the leader decided to "watch such stupid American behavior for a bit longer" rather than giving the go ahead for the attack, taking what appears to be a step back from his belligerent stance after Washington suggested diplomatic talks.

However, Kim said he would have to make an "important" decision if Washington’s  "extremely dangerous reckless actions" on the Korean Peninsula continue, in what appears to be a reference to joint military drills by the US, South Korea and a number of guest nations launched Monday.

As the US and South Korea begin their annual 10-day Ulchi Freedom Guardian exercises, the allied nations are enhancing their surveillance and military readiness against potential provocation from the Democratic People’s Republic of Korea (DPRK).

The Combined South Korean-US Forces Command have alerted more intelligence agents, and it is reported US Forces Korea and Air Force have flown additional tactical reconnaissance aircraft over the peninsula.

Though Pyongyang walked back it’s specific threat against Guam, it continues to call the US and South Korean drills and intolerable provocation, and it insists war cannot be ruled out.

North Korean military officials said Tuesday that "No one can vouch that these huge forces concentrated in South Korea will not go over to an actual war action now that the military tensions have reached an extreme pitch in the Korean Peninsula," according to AP.

"Moreover, high-ranking bosses of the US imperialist aggressor forces flew into South Korea to hold a war confab. Such huddle is increasing the gravity of the situation."