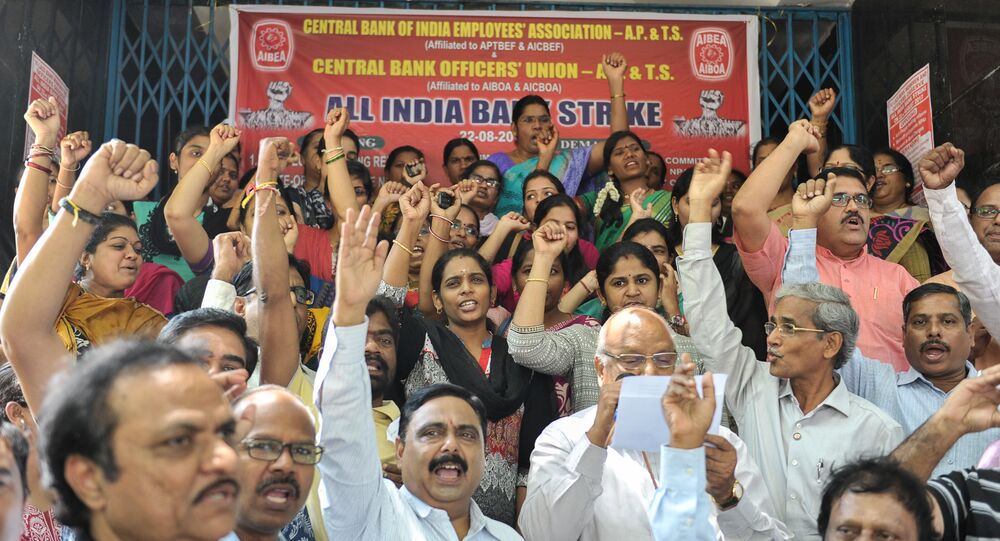 Recently, the State Bank of India merged operations of five of its associate banks and the Bharatiya Mahila Bank with itself, catapulting the entity in the league of top 50 global banks in terms of assets.

NEW DELHI (Sputnik) — Millions of public sector bank employees across India went on a strike on Tuesday to protest government's plan to introduce a new banking structure by consolidating public sector banks and selling stakes to private players. The United Forum of Bank Unions (UFBU) said it feared that plan would result in total privatization of $1.3 trillion funds available with 20 state-owned and 52 regional rural banks.

"All of us know that nearly 80% of the deposits of the Banks are domestic savings of the poor and common masses and this precious social capital has to be preserved for utilization for developmental role. Given the bitter experience of so many private banks abusing and misusing depositors' money leading to closure of banks, we need to be doubly careful and guarantee the safety of people's money which is possible in a public sector institution," Pankaj Kapoor, General Secretary of Bank Of India Officers' Association said.

The Union has also alleged that the government has been favoring big entrepreneurs by writing off their loans as non-performing assets.

"The only major problem faced by the Banks today is the alarming increase in bad loans. It is around $230 billion including the loans restructured by the banks. While some loans becoming bad can be expected and accepted in the banking business, today taking loans from banks and making it as non-performing asset (NPA) has become an exquisite art. Many huge NPAs have deliberately defaulted and hence are willful defaulters under the RBI norms," Kapoor added.

The Indian government plans to reduce the number of state-run banks to 10 — 15 through a series of mergers and acquisitions in the coming months.

"Consolidation will not be taken too far to four or five, as speculated, since the whole system breaks down even if one fails. Eventually possible number will come down between 10 and 15. It will be done purely on commercial basis," Sanjeev Sanyal, a principal economic adviser at the Indian finance ministry said.

As many as twenty-one public sector banks control 75 percent of the total banking business in India.