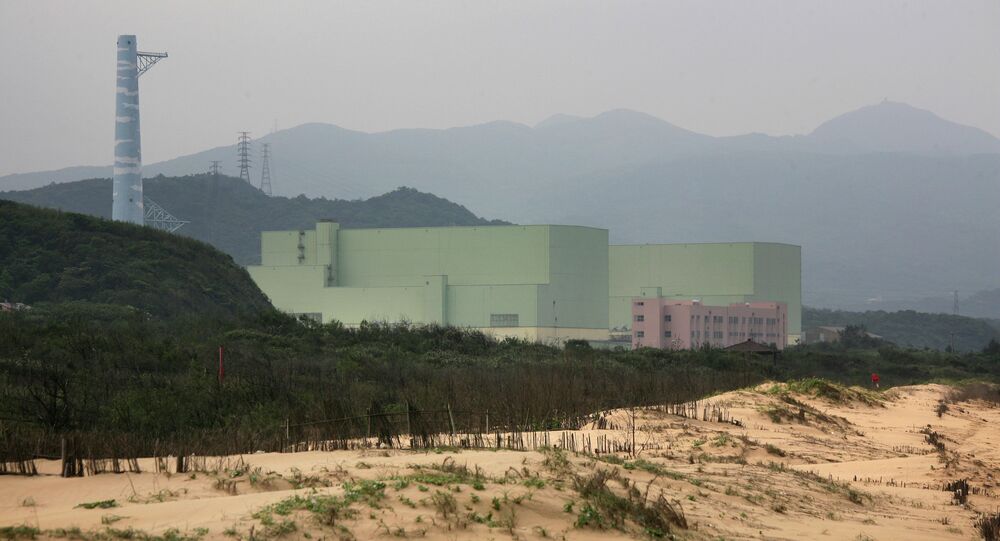 MOSCOW (Sputnik), Tommy Yang — During her presidential election campaign, Tsai used the nuclear-free energy plan as her signature policy to win support from voters, who bought into her promise of removing the island’s reliance on nuclear power for electricity by 2025. But a massive power outage on August 15, leaving millions of local residents and businesses in the dark for over five hours, raised questions on the feasibility of Tsai’s ambitious energy plan.

Under Tsai’s plan, contribution from renewable energy such as solar and wind to Taiwan’s total power supply is expected to grow from 4.8 percent in 2016 to 20 percent by 2025. Contribution from natural gas is expected to rise to 50 percent by 2025, from last year’s 32.4 percent. At the same time, nuclear energy, which accounted for 13.5 percent of power supply last year, will be completely phased out by 2025.

© AFP 2021 / NICOLAS ASFOURI
We Can Work it Out? US, China Announce Intention to Strengthen Military Ties
No need to rush

Experts in Taiwan argued that the recent extensive blackout is a good reminder that Tsai’s bet on renewable energy still faces many challenges and the government should not rush to eliminate nuclear energy.

"The blackout happened because Tsai’s policy to get rid of nuclear energy was too much in a rush. If nuclear power reactors taken offline were still operational, the blackout would not have happened. The government need to face the deficiency in Taiwan’s power supply in a pragmatic way and allow nuclear power reactors to continue to run, until other options are mature enough to replace them," Yeh Tsung-Kuang, the director of the Nuclear Science and Technology Development Center at National Tsing Hua University in Hsinchu, Taiwan, told Sputnik.

The state-owned Taiwan Power Company, which monopolizes power supply on the island, said the blackout was caused by human error after its engineers accidentally cut off gas supply at the gas-powered Tatan Power Plant, taking about 4.2 million kilowatts of power generating capacity offline.

Smelting heat waves in recent weeks drove Taiwan’s power consumption to a record high of 36.2 million kilowatts in early August. The Taiwan Power Company had to issue a red alert on power supply, with plans to introduce rationed electricity supplies during peak hours.

Taiwan has six nuclear power reactors with a total capacity of 5.14 million kilowatts. But only two of the six reactors are currently operational, offering about 1.9 million kilowatts of capacity. A spokesperson for the Cabinet in Taiwan said in early August that the government has no plans to restart the nuclear reactors that have been taken offline despite ongoing power shortages.

Taiwan’s Ministry of Economic Affairs estimated that the blackout caused losses of about $2.89 million for 151 companies in industrial parks and export zones on the island. The Taiwan Power Company said it would offer $11.9 million in electricity fee reduction to the 5.92 million households affected by the power outage.

© Sputnik / Vitaliy Belousov
ASEAN Summit: How China Diplomatically Outflanked the US in Manila
However, Yeh, the nuclear scientist, believes that Tsai's administration is unlikely to change its current policy on nuclear energy, until more and more similar blackouts start to take place in the future.

"I don’t think she [Tsai] will make any changes, because if you pay attention to her comments after the blackout, she still stressed the problem lies in the structure of Taiwan’s power grid, as opposed to the deficiency in overall power supply. To change her attitude, there will have to be more and more blackouts in the future," he said.

Following the blackout, Tsai issued an apology to the people of Taiwan, but added that "the direction of our policy would not change and today’s incident only made us more determined." At the same time, Lee Chih-kung, Tsai’s economic minister, resigned to take responsibility for the incident.

Taiwan is a key player in the global supply chain of semiconductors. A wide range of memory chips and computing modules are produced by Taiwanese companies such as Advanced Semiconductor Engineering (ASE) and PowerTech Technology, whose products are crucial components of popular smartphones such as the iPhone.

According to a statement from ASE after the power outage, the impact on production from the blackout is estimated to be between $500,000 and $800,000. PowerTech Technology ‘s Chief Financial Officer Evan Tseng said the sudden power cut caused some damage to some products, but adding that "such disruption is limited and would not have significant impact on the overall shipment."

The Hsinchu Science Park, often known as the heart of Taiwan’s semiconductor industry, was also hit by the blackout. With many factories running 24 hours a day, a sudden power cut without warning could cause serious damages.

© REUTERS / Tyrone Siu
Over 100 People in Taiwan Left Injured by Typhoon Nesat
Yeh, the Hsinchu-based scholar, suggested that instability in power supply could make these companies have second thoughts when deciding on further investment in Taiwan.

"I think the companies cannot accept instability in power supply. Their production line could face huge losses in case of a sudden power cut. For example, Taiwan’s Hon Hai [Precision Industry] has already decided to invest in the United States," he said.

Despite the Tsai administration’s commitment to developing renewable energy such as solar and wind, it continues to face a lot of challenges in the adaptation of related technology.

For example, the installation of solar panels requires a lot of land, which has become more and more scarce on the island of about 36,200 square kilometers (14,000 square miles). The installation of wind turbines in offshore areas also need to go through complicated environmental evaluation process. Compared to traditional power plants or nuclear power reactors, solar panels and wind turbines are more likely to experience potential damage from strong typhoons that hit Taiwan several times a year.

However, advocates for renewable energy argued that it is still up to the government in Taiwan to do a better job in adapting new technologies.

"Taiwan started to develop renewable energy from 2010. But as the end of last year, solar energy only contributed to about one percent of total power supply. The progress has terrible. In comparison, Japan only started to focus on renewable energy in 2012, one year after the nuclear disaster [at the Fukushima Nuclear Power Plant]. But solar already contributed to about 4 percent of Japan’s power supply by the end of last year," Gloria Hsu, a professor of atmospheric science at the National Taiwan University in Taipei and director of Mom Loves Taiwan Association, which advocates against nuclear power, told Sputnik.

© AP Photo / Zha Chunming/Xinhua
China’s New Ballistic Missile Marks New Chapter in Global Nuclear Deterrence
Hsu believes the main reason for the slow growth is because of the monopoly of the Tai Power Company, which does not welcome other competitors.

"I think the government needs to set up an independent team with experts from outside to inspect the island’s power supply system and find a better solution," she said.

As Taiwan's authorities also plan to boost the contribution of natural gas to the island’s overall power supply, the Taipei-based expert argued that it would be unreasonable for the Tai Power Company to try to raise electricity prices amid the sluggish global oil and gas market.

Over 100 People in Taiwan Left Injured by Typhoon Nesat