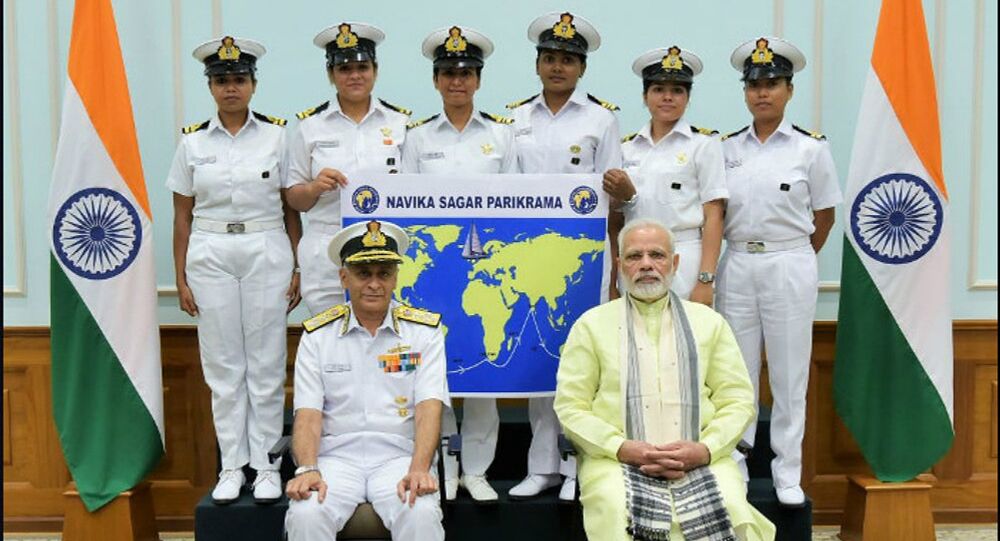 The circumnavigation of the globe, sailing through some of the most perilous waters, will bring lady officers of the Indian Navy a step closer to serving in warzones for the first time.

New Delhi (Sputnik) — Six lady officers of the Indian Navy will set off from Goa later this month to circumnavigate the globe on the sailing vessel Tarini. The first-ever circumnavigation of the globe by an Indian all-women crew will bounce across roughest seas in the world and will stop just four times on the way. During their eight month voyage, six women led by Vartika Joshi will crisscross the equator twice and the international dateline once. India's Prime Minister Narendra Modi wished the women crew well and exhorted them to project India's capabilities and strengths across the world.

© CC0
Indian Navy Floats Global Tender for High-Tech Night Vision Helmets
INSV Tarini is a 55-foot sailing vessel, which has been built locally and was inducted in the Indian Navy earlier this year. "The expedition has been titled Navika Sagar Parikrama and will be undertaken in five legs, with stop-overs at 4 ports," Indian Navy said in a statement. Tarini will carry 600-liter drinking water, a reverse osmosis plant and dry supplies for food.

Tarini will sail first to Fremantle in Western Australia and next to Lyttleton in New Zealand. First two stop which includes notoriously rough the Tasman Sea will be covered in 57 days. In her next stop, six officers will sail from New Zealand to Port Stanley in the Falkland Islands-close to Antartica. From there, officers will move to Cape Town and then return back to Goa in March 2018.

Last year, the Indian Navy had made a historic announcement that it would take lady officers onboard warships if they were found suitable for warfare. Presently, the Indian Navy has approximately 600 women serving as medical and supporting staff.