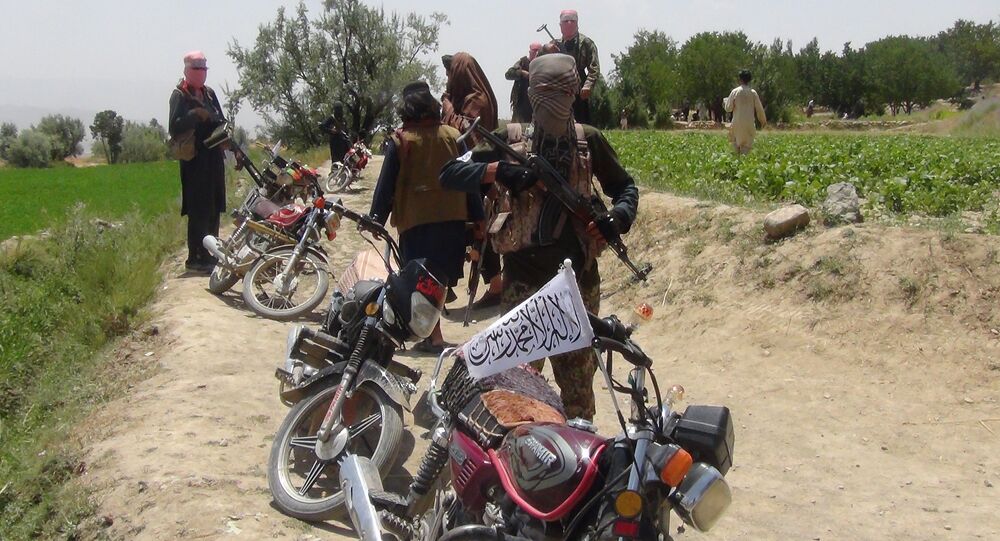 The Taliban has recently sent a new letter to President Trump, warning him against sending more troops to Afghanistan and demanding a full US withdrawal from the country. Sputnik Afghanistan discussed with Afghan political analysts whether it will force the US leader to alter his new, yet-to-be-announced policy for the Asian country.

On Sunday, the Taliban radical movement released a new open letter to President Donald Trump, calling for a full withdrawal of foreign forces from Afghanistan, claiming that the ongoing violence in the country has a direct link to the presence of foreign troops, which it calls "occupation forces."

It also said that the foreign powers had become involved in the war in Afghanistan in order to serve their own interests, and blamed the US-led coalition for the destruction of the country, arguing that the invasion had made it one of the worst in terms of security, governance, and economic prosperity.

© AFP 2021 / Thomas Watkins
Why US Won't Leave Central Asia 'Any Time Soon' and What It is Really After There
The Taliban's new letter has been released amid a Trump administration review of the US government's Afghanistan policy.

Sputnik Afghanistan discussed with Afghan political analysts whether the message will prompt the US leader to alter its plans for the central Asian country.

"Afghanistan is currently in the center of attention for world and regional powers – the US, the NATO member states, Russia and its allies India and China. However, we can't deny that from an economic point of view, the US and other NATO member states are bearing the major expenses in our country. They vowed to provide assistance to Afghanistan until 2020," political analyst Ruhollah Ahmadzai told Sputnik.

He further noted that the war in Afghanistan has turned into a big headache for the US and its European allies because their calculations, which they made 17 years ago, have failed.

With regards to the Taliban's letter to Trump, the political analyst said that it says more about the will of Pakistan and its intelligence services than any desire of the Taliban. Thus this letter does not actually matter to the White House.

Ruhollah Ahmadzai also commented on the possible increase of the US contingent in his country.

© Wikipedia
US' Blackwater Mercenaries 'Will Bring Hatred, Not Peace to Afghanistan'
On August 3, US Sen. Lindsey Graham said the United States could turn the tide of the war in Afghanistan with just 3,000-4,000 additional troops and boosted air capacity.

In July, US Defense Secretary James Mattis said the Pentagon was close to completing its policy review for a new strategy in Afghanistan.

"The suggested increase of US troops in Afghanistan should become a topic for discussion between American and Afghan political analysts," Ruhollah Ahmadzai told Sputnik.

He further explained that if the US increases its contingent, it will lead to the repetition of the bloody events which happened 17 years ago and won't contribute to the fight against terrorism. What the US should really do, he said, is hold Pakistan accountable for its 22 years of subversive activities in Afghanistan. It should study all the documented evidence of the UN and US intelligence services. Through the US as an intermediary, all countries should condemn the criminal activities of Pakistan and isolate this country.

When asked if the Taliban would be to overtake Afghanistan once again, the political analyst said that the military and political situation in the country is different from what it was 17 years ago,

"Our army has become better and stronger, our provinces become more secure. Our army is able to rebuff the attacks of terrorist groups which are being sent from abroad," he said.

© REUTERS / Omar Sobhani
What's Behind Russia's Warning of 'Resorting to Military Force' in Afghanistan?
According to political analyst Nasir Torki, the letter to Trump contains nothing new.

"For 15 years, the Taliban has been putting forward the very same demands. However, we should not dismiss the fact that this movement has recently strengthened militarily and has new political backers," he told Sputnik.

However, if the Afghan security forces get considerable financial support, he said, they will be able to help the Afghan government move forward from the deadlock of the ongoing war.

Meanwhile, US Department of State spokeswoman Heather Nauert has commented on the letter.

"What is going on in Afghanistan is a result of the Taliban. We’ve seen, and there was a report out not that long ago, about the increase in attacks on civilians, which largely included women and children. That is being perpetrated by members of the Taliban," she was quoted as saying by the Kabul-based Khaama Press news agency.

© Sputnik / Alexandr Graschenkov
Mystery Aviation in Afghanistan: Whose is it?
"Let’s not lose focus [on the fact] that the Taliban is behind many of those attacks, and much of the increase in civilian casualties. That undermines the Afghan population and also the Afghan Government, so let’s not lose focus of that," she added.

In the letter to the US President, the Taliban, however, claimed that the ongoing insurgency led by the group "has a national resistance and is properly administered politically and militarily, insisting that in absence of such an administration the violence could further spread to the region and across the globe."