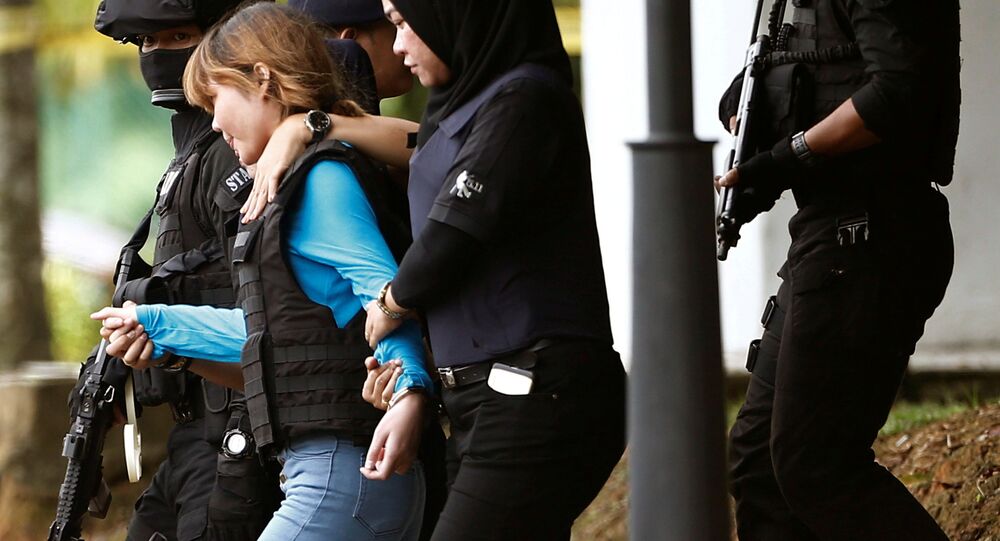 The two women accused of killing Kim Jong-il's half-brother in Kuala Lumpur are due to go on trial in October. But a defense attorney for Siti Aisyah has said she was told she was playing a prank on him and has accused the Malaysian authorities of deliberately allowing key witnesses to flee the country.

Kim Jong-nam was the eldest son of Kim Jong-il and was once expected to assume leadership of the isolated nation, though he fell out of favor with his father more than a decade before Kim Jong-il's death in 2011.

His half-brother, Kim Jong-un, took over after their father's death and is thought to be behind Kim Jong-nam's assassination in February.

Indonesian masseuse Siti Aisyah, 25, one of the two main suspects, told officials from her country's embassy she had been paid 400 Malaysian riggits (US$90) to play a prank on Kim for a YouTube prank show.

She said he was a complete stranger to him and had no idea who he was or what the baby oil-like substance was that she was told to wipe on his face.

It turned out to be a highly toxic chemical called Ethyl N-2-Diisopropylaminoethyl Methylphosphonothioate, better known as VX.

Kim died in the ambulance while being transferred from the airport to a hospital in the Malaysian capital Kuala Lumpur.

Gooi Soon Seng, who will be Ms. Aisyeh's lead defense counsel at her trial, said she had told him she had met a "Japanese man" called James six weeks before Kim's death.

He said she was asked to carry out a number of "pranks" on people including several at the airport, the last of which was the incident involving Kim.

Mr. Seng said that in the days before the airport incident James had told her she was "becoming a big star." He said she had not enjoyed her job as a masseuse and was hoping the YouTube prankster job could be her "new career."

In CCTV footage which will be shown at her trial, she can be seen walking up towards Kim and smearing something across his face at the same time as a Vietnamese woman, Doan Thi Huong.

© REUTERS / Lim Se-young/News1
People watch a TV screen broadcasting a news report on the assassination of Kim Jong-nam, the older half brother of the North Korean leader Kim Jong Un, at a railway station in Seoul, South Korea, February 14, 2017.

Huong, 22, who was originally from Hanoi, has told investigators the same story and has said she and Ms. Aisyah were complete strangers. Malaysian police investigators studied the CCTV footage from the airport and spotted four North Korean agents were in the vicinity at the time of the incident.

The man apparently leading the operation was Ri Jae Nam, 57, who can be spotted hanging around outside a coffee shop only yards from where Kim was assaulted.

Ri and the three other agents immediately boarded planes and made their way back to North Korea via circuitous routes, including Jakarta, Dubai and Vladivostok.

The other agents were named as Hong Song Hac, 34, O Jong Gil, 55, and Ri Ji Hyon, 33. Four others who worked at the North Korean embassy and who were believed to be complicit in the assassination were allowed to leave Malaysia in the weeks following Kim's death after North Korea effectively held hostage nine Malaysian diplomats.

Mr. Seng said it would be impossible to get to the truth of what happened now the North Korean agents have flown the coop.

"This case is somewhat mysterious and it involves a question of politics. Nine Malaysians were held hostage in Korea and in exchange for those nine hostages four suspects were allowed to go back to Korea. Those suspects may be very vital to the defense but now that they were allowed to go back it has severely compromised the defense case… this could cause a miscarriage of justice," said Mr. Seng.