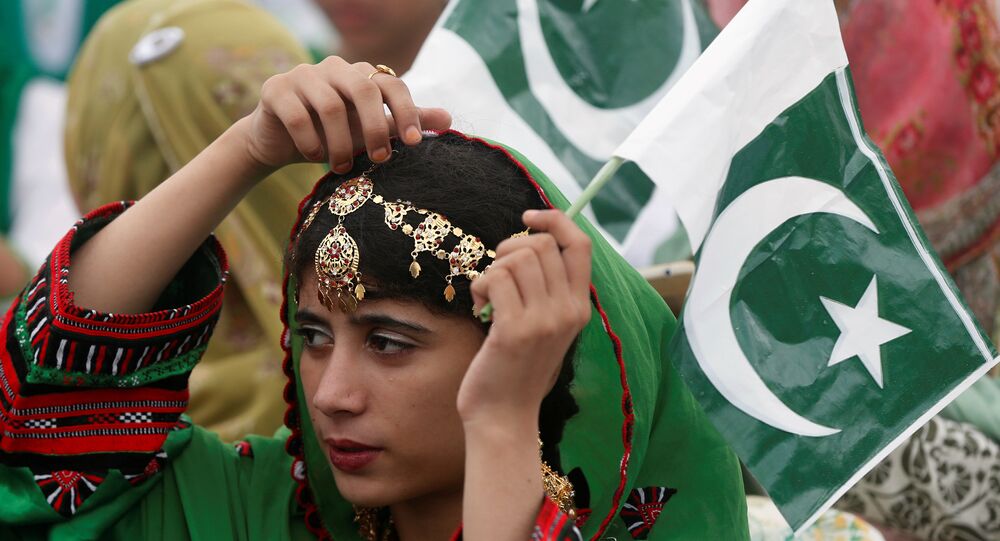 Pakistan is celebrating 70 years since it became independent from Britain. But for the Pakistanis, the anniversary comes amid political turmoil that has characterized successive civilian governments of the country, which has been dominated by military rule through much of its history.

Pakistan hoisted a huge flag on Sunday, August 13, at one of the busiest border posts, on the road from Lahore to Amritsar to mark the anniversary on Monday, August 14, of Pakistan becoming independent in 1947.

"Today, the country is progressing on the path of the law and the constitution. All institutions are working properly," said General Qamar Javed Bajwa.

"We have rendered many sacrifices — we will never forget our martyrs. We will execute each and every terrorist in Pakistan. I want to tell our enemies, whether they are in the east or in the west, that your bullets will end but not the chests of our soldiers," he added.

The partition of India, which led to the deaths and displacement of millions of people and the creation of two countries, happened 70 years ago this week.

A British civil servant, Cyril Radcliffe, drew an arbitrary line on a map of what was then British India, creating two countries.

India — which had a Hindu majority but was founded on secular lines — had the lion's share of land and Pakistan was divided into two parts, both with Muslim majorities.

In 1971, East Pakistan broke away from West Pakistan, after a brief but bloody war, and became Bangladesh.

While India has had 70 years of unblemished democracy — bar the "state of emergency" imposed by Prime Minister Indira Gandhi between 1975 and 1977 — Pakistan has been bedeviled by coups.

Three times — in 1958, 1977 and 1999 — the army has overthrown the elected leaders of Pakistan and there have been extended periods of military rule, most notably in the 1980s when General Zia ul-Haq, backed by the CIA, ruled the country after executing Prime Minister Zulfikar Ali Bhutto.

Wars in Afghanistan, and the rise of the Taliban, have destabilized Pakistan in recent decades.

During the 1980s Zia and his CIA backers supported the Mujahideen who fought a long and bloody guerrilla war against the left-wing government in Kabul and their Soviet allies.

But in the 1990s it became clear that the enemy the Red Army had been fighting in Afghanistan was the same enemy that hated the West — the forces of reactionary Islam.

In 1996 the Taliban marched into Kabul and imposed their extreme views on the population. Women and girls in particular took the brunt of their policies. Before long the Taliban's ideology was leaking over the border into Pakistan and when 9/11 happened and a US-led coalition invaded Afghanistan in pursuit of Osama Bin Laden and his Taliban allies, many of them slipped across the mountainous border into Pakistan.

A very happy Independence Day to #Pakistan and to all those marking the occasion in London and around the world. pic.twitter.com/6qP9uozcWe

In 2007 Benazir Bhutto, who was despised for being a woman leader as well as a liberal, was assassinated at an election rally in Rawalpindi.

Four years later a group of US Navy SEALs assassinated Bin Laden at his hideout, which was less than a mile from Pakistan's main Military Academy in Abbottabad.

"Before 2001 Pakistan rarely ever had any bombings and since then there have been 800 or 900," an anonymous businessman from Lahore told Sputnik.

"Pakistan used to be quite an open country until the '80s. It was a place where a lot of foreigners would come for holidays, but in the '80s the constitution was changed to make Islam a bigger part and things have changed dramatically over the last few years," he said.

There have been several bombings in Lahore this year. In July, a suicide bomber killed 26 people at a vegetable market in the city and then last week a truck bomb killed 34 people.

"Lahore used to be reasonably safe and I used to tell all my friends to come and visit. But this year there have been three bombings," the businessman told Sputnik.

"My family's business is a department store and there have been some threats on WhatsApp or text messages. One of our stores was named, because it's a crowded area. You do feel threatened. You think 'I'm going there, but is this a threat or a sham?' " he told Sputnik.

He said the bombings were usually claimed by the Taliban, who shared a similar outlook on life.

But the businessman said the Taliban did not get on well with Daesh and they had criticized each other's actions.

In 2014, Daesh criticized an attack by the Taliban on a military school in Peshawar which killed 132 children, and the following year the Taliban criticized Daesh units who massacred ethnic Hazaras in northern Afghanistan.

But the businessman said that although the situation in Pakistan now was frightening, he was hopeful about the country's future.

"It's a really young country, it's only its 70th birthday. Many developed countries are hundreds of years old. It could be a transitionary period," he told Sputnik.

"A lot of the people in my generation are quite open-minded. More education is spreading around the country and it's going in the right direction. Economically,  we were recently named as an emerging market. People have been making money on the stock exchange, living standards are going up," he added.

"In the next 30 or 40 years we will be in a much better position, with Chinese investment, and more people going abroad and coming back, more multinationals coming into Pakistan, I think it will be a better place," the businessman told Sputnik.

"But what has to change is the politics of the country, so that people are not just embezzling money into their own accounts and moving abroad, which has been the case with a lot of our civilian prime ministers and presidents," he said.

On July 29, the Pakistani Supreme Court removed Prime Minister Nawaz Sharif following a corruption investigation into his family. The investigation was launched after the Panama Papers leak revealed in April 2016 that Sharif's two sons and a daughter owned at least three offshore companies registered on the British Virgin Islands.

But he was promptly replaced as by interim PM Shahid Khaqan Abbasi.