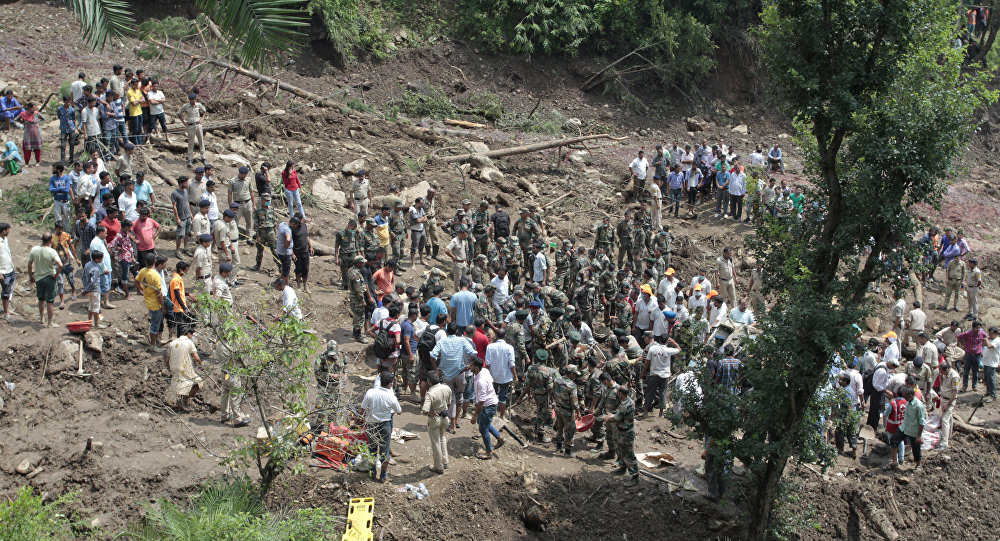 At Least 46 Killed in Massive Landslide in Northern India - Reports

At least 46 were killed in a massive landslide in northern India that swept away a stretch of a highway on Sunday, the Hindustan Times newspaper reported.

The landslide in India's Himachal Pradesh state was triggered by heavy monsoon rains.

Two buses were buried under the debris on the national highway, the newspaper said, citing Deputy Commissioner of the town of Mandi Sandeep Kadam.

Moreover, many houses were washed away in the torrential rain that hit the region in the Himalayan foothills.

Indian police said earlier in the day more bodies of victims of the disaster may still be found in the debris. The continuation of the search and rescue operation has been suspended until the morning.

50 feared dead as two HRTC buses washed away in landslide in Mandi https://t.co/UauJnwEBWZ via @TOICitiesNews pic.twitter.com/wJkye04XqM

Earlier in the day, media reported that seven people were killed and dozens were considered missing.

Indian Prime Minister Narendra Modi has already expressed his condolences to the victims of the landslide.

"Pained by the loss of lives due to landslide related accidents in (Himachal Pradesh's) Mandi district. My condolences with the families of the deceased."

Landslides used to happen in the region during the monsoon season in the summer.

At Least 19 Killed by Landslide in India, 140 Trapped Underground