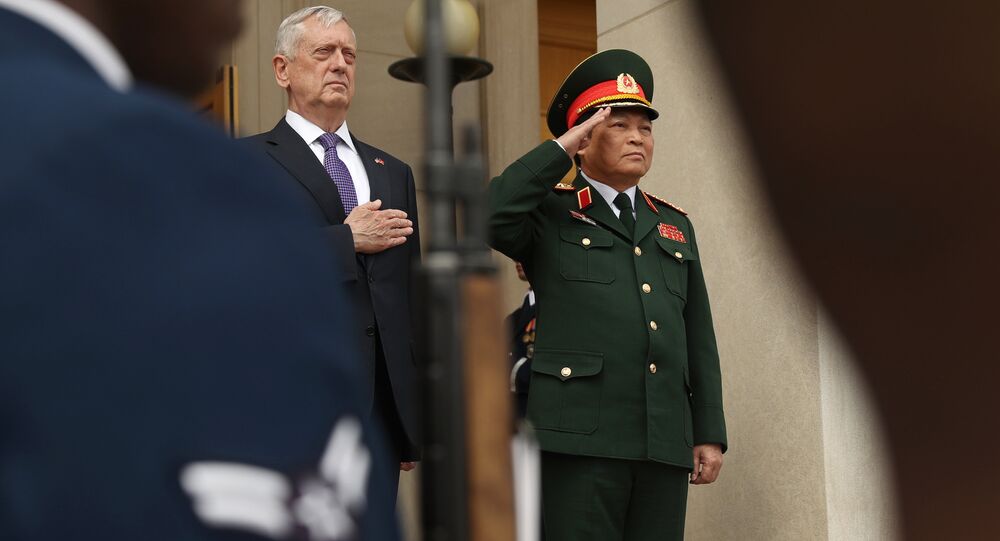 The US and Vietnam have agreed on a visit by a US aircraft carrier to the country next year. It will be the first such visit since the Vietnam War ended in 1975. Radio Sputnik spoke with an analyst, Dr. Collin Koh Swee Lean, in an interview about this development.

US Defense Department
What Makes Vietnam an 'Ideal Client' For the United States?
During the recent meeting between Vietnamese Defense Minister Ngo Xuan Lich and his US counterpart James Mattis, the two defense leaders agreed to deepen mutual military cooperation.

Following the talks held in Washington, Jim Mattis said that strong relations between the two countries were based on mutual interests, including freedom of navigation in the South China Sea.

In an interview with Radio Sputnik, a research fellow at the Maritime Security Program, Dr. Collin Koh Swee Lean, said that this cooperation has been flourishing the past few years.

“First of all it is important to highlight that this recent announcement of the aircraft carrier visit was built on the earlier upswing in the political relations between the US and Vietnam even during Obama’s administration, so now Trump’s administration is building on that momentum,” Lean said.

He further said that earlier it was seen that US ships have made visits into the region close to Vietnam, so the planned visit of the aircraft carrier is not just a “show of commitment to Vietnam, but to the South Asian region in general.”

“I think by doing this, the US shows that it is still interested in maintaining peace and stability in the region,” the analyst said.

Talking about how the US and Vietnam relations have developed since the end of the Vietnam War in 1975, Lean said that there was a postwar time and it resembled the Cold War era, but there was a change in attitude not only in the US but also in Vietnam, as the country became more independent in its foreign policy.

1975 marked the end of the Vietnam War. The war, also known as the Second Indochina War or Resistance War against America, was fought from 1955 to April 30, 1975.

“Over time there was a gradual improvement or rapprochement in relations between the US and Vietnam, but those relations back then were actually bound to diplomatic dialogue as well as some economic exchanges, but from the 2000s we saw improvement in the scope of those collaborations that comprised heavier element of defense and security issue,” Lean said.

© AP Photo / Horst Faas
How Distorted Intelligence Dragged US Into Vietnam War 53 Years Ago
He further spoke about the South China Sea dispute and how China might react to US-Vietnam defense cooperation.

He further spoke about how Vietnam supports the rule based order and freedom of navigation that was mentioned during the Obama administration and not just recently.

However, Vietnam’s defense cooperation, according to Lean, is not isolated to just the US, because Vietnam is also similarly cooperating with Japan and it generally aims to have better cooperation with regional countries in light of its more open foreign policy.